Today is my Mom's birthday, but she won't be home to read this post for a few more days. Why is she not home on her birthday? She's graduating! After this weekend, Mom will officially be a minister in the United Church. A few years ago, the church in their little town lost their minister. Ministers are hard to replace these days. There just aren't many of them around anymore! Unlike her daughter, my Mom is an extrovert. Public speaking never seems to bother her too much! So she started doing services. After this weekend, she will be all offical!

I don't attend church except when I go visit my folks. I have seen my Mom at the pulpit and she is truly gifted. Even if you don't believe a word she's saying, there is no denying that she says it in an entertaining, engaging way with great faith and passion. Her congregation is blessed to have her.

It seems other congregations realize that she is good too! She's had job offers from other churchs and even the school she's about been attending! All of which she has turned down; she says because she undertook this training for her home church, but let's face it, no other church has her three granddaughters living across the street!

Happy Birthday, Mom and Congratulations. I am personally blessed to have such a determined, strong, smart, caring woman as my Mom!
Posted by Wandering Spirit Kennels at 10:21 a.m. 7 comments:

My dogs do like to keep me on my toes. Doing something the easy way is just not in their natures. They are huskies after all!

As a pack, they occasionally have wee disagreements, which usually end in a run to the vet with a bleeding dog or two. The amount of blood required for a vet run has increased over the years, but a dozen dogs in one fight is going to require a pro at some point! Last Tuesday night, the dogs got into one of those disagreements. Fortunately, I got them apart before any serious damage was done....or so I thought. 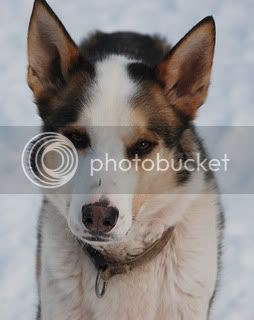 Ozzy, who start the fight, cuz that's what he does, ran to the door on three legs screeching his head off. For which he got a "that leg better be broken you little jerk" and put in his crate with some Metacam. He limped for a few days, but seemed to be ok. Then over the weekend, the limp got worse again and noisy, active Ozzy did not complain once about being put on crate rest. Not a good sign. 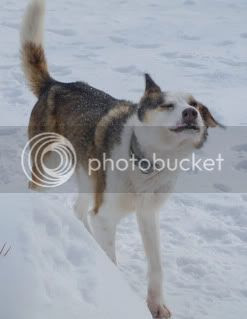 So he spent today at the vet. Being left is major for Ozzy. He's very timid and he grew up in a shelter. Concrete kennels are scary, scary places for Ozzy, especially when the only person he trusts closes the door and walks away. That was the saddest face I've ever seen and there's just no way to convince a dog that you really are coming back in a few hours!

Ozzy has a broken shoulder blade! I suspect he lunged after Founder, the dog on the bottom of last week's pack fight, who was hiding under the porch swing. Ozzy probably hit his shoulder on the metal swing legs. A little piece of the shoulder blade is just floating around in the joint, causing the inconsistent limp! Dr. Jessica sent the x-rays off to a specialist today...thank God for digital x-rays that can be emailed! She suspects Ozzy will need surgery to remove the bone chip, but wants an expert opinion before she starts messing around in his joints. I appreciate her caution! Ozzy will likely have surgery later this week, after the specialist responds. 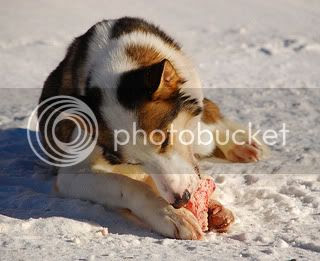 My poor little sweetie. He is a bit of a troublemaker, but he's really a very sweet boy. It's been a lot of work and six years to get Ozzy from untouchable to snuggling on the couch...course he only cuddles with me; if he doesn't know you he will bark incessantly until you go away!

The only good thing out of today....Ozzy survived and maybe learned that I come back! Plus the last time Jessica saw him it was for his weight. Ozzy is a hard keeper and gets dangerously skinny. This time last year, he looked like a starving stray and I was sure he had some form of cancer that was causing him to waste away. He actually has a metabolism I would kill for. Today his weight is just under 54 pounds, which is absolutely perfect...it takes three times the food the other dogs get to keep him there, but at least I'm not embarassed to take him for a walk anymore!
Posted by Wandering Spirit Kennels at 8:06 p.m. 7 comments:

Someone must be looking for this boy... 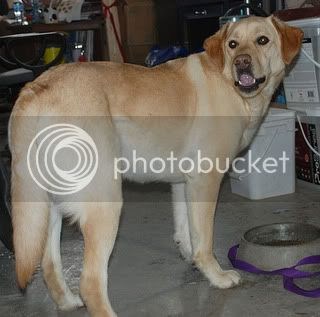 He wandered into my yard yesterday, a young, neutered Golden Lab. He's very friendly and sweet. Gets along well with other dogs. I like him, but Labs are not my breed and I don't want any more dogs.


Edited to add that Buddy was reclaimed on Monday evening, by his much relieved caregivers who he was delighted to see!
Posted by Wandering Spirit Kennels at 10:05 a.m. 4 comments:

This morning Pirate was released from her failing body. Pirate was old and unwell when she arrived here. Some good medications gave her 14 months of comfort, warmth and high quality of life. Over the past few weeks, she had begun to fade with her bad days getting closer and closer together. This week she did not rebound and was just getting worse. Her mobility was limited, she needed more and more assistance with everything.

Her quality of life was gone, so we gave her the one thing we had left....a gentle, peaceful passing. The vet came to the house and Pirate passed with no stress, on her favorite blankets with her people holding her paws. She was ready to go; I wasn't nearly as ready as I thought!

Pirate was with us for a mere 14 months out of her many years, but in that time she knew comfort, warmth and love. She was dry and safe. I'd imagine that this place is hard to adjust as an elderly dog, probably tricky as a young dog, but Pirate adapted to being a house dog in no time. She loved lounging around on her blankets and even tolerated the cats walking over her. She was deaf as a post, but somehow always heard the kibble hitting her bowl. She never missed a meal, even last night, when I had to hold her up, she still wanted to eat.

She showed us signs of what she must have been like as a young dog. I bet she was a handful! Even at 14 she thought she was tough and she hated Sleet, my other ancient girl. The only time I've ever laughed while breaking up a dog fight was pulling those two apart...both almost toothless, stiff and half blind, but still willing to battle it out! 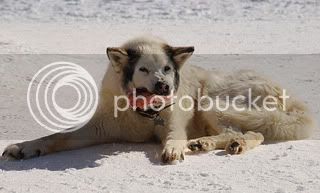 This is my favorite picture of her, taken just a couple weeks ago. I rarely gave Pirate bones; she had a delicate digestive system and extra treats usually meant extra mess for both of us! She didn't really eat that bone, but she gummed it up for hours and enjoyed every second of it!

I hope in some way the last 14 months of your life compensated for the crappy earlier years. I'm glad you made it here, even if it wasn't for nearly long enough. You were and will always be deeply loved. Godspeed, Pi-Shy girl.
Posted by Wandering Spirit Kennels at 2:59 p.m. 13 comments:

Still playing in the snow...

This might have been our last run of the season. There's still plenty of snow, but it's getting pretty punchy and icy. Plus the road crossing is clear and dry, great for driving the van, not so great for the sled! 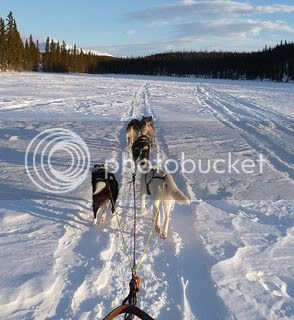 It's a five dog team because Hobo really wanted to come. Some of the other dogs are loosing interest in running this time of year, but not Hobo. He never looses interest! 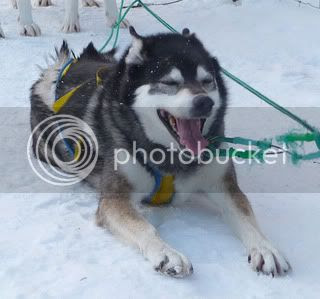 He is one happy sled dog! Hobo turned 12 this winter and he's showing his age a little bit. He's slowed down just enough that he actually fits in my team now. When I first got him, he was way too fast for us and it frustrated him to no end! Now he's happy to just trot along for 5 miles and then take over the couch for the rest of the day!
Posted by Wandering Spirit Kennels at 11:30 a.m. 6 comments: