No cancelled appointment for Hobo today! He had improved dramatically....just about anything would have been an improvement over the way his eye looked last week! He was almost back to normal, but he wouldn't chew. Partly that was a monster I created; Hobo really likes canned food, but he wouldn't touch kibble. So he kept his dental appointment today.
And it turned out to be a good thing...painful for both his mouth and my wallet, but a good thing anyway! Hobo had several rotten teeth, including the one suspected to have caused the original abscess. By the end of the day, Hobo was short four teeth! Hopefully, that takes care of the problem...he's running out of teeth! Fortunately, it appears that nothing worse than an infected tooth or three was causing Hobo's troubles. There was no sign of a bone issue, a tumor or other serious problem. 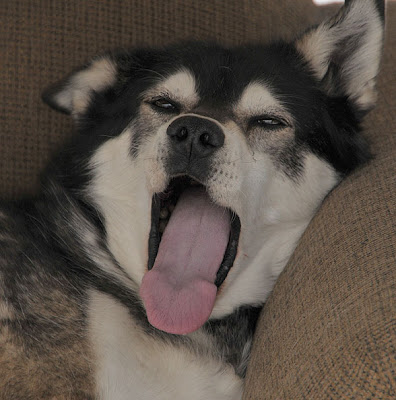 Hobo wanted dinner tonight, although I only gave him a tiny bit of canned food. That's much more typical of my boy...not much keeps Hobo from his dinner!

Firsts are not always good things..

Last night for the first time in the six years we've known each other, Hobo refused to eat. No Hobo Dance of Joy as he waited for his bowl to be filled; didn't even sniff the food; wouldn't eat a single bite. For most of my dogs skipping dinner once in a while is not a big deal; for Hobo I took it as a sign something was very wrong. I've seen Hobo eat with infected molars; within hours of surgery to remove those molars; during his entire recovery from the wolf attack he never ever missed a meal, not even the day after he had major surgery to put his ravaged little body back together.

This morning, Hobo headed to the vet clinic. When I finally convinced him to stand up, at least part of the problem was obvious. The left side of his face was swollen, his eye was weepy, both classic signs of a dental infection. Not a good thing, but better than some of the alternatives I had come up with overnight!
But it's not a tooth. That would be relatively simple. My dogs don't do simple! Hobo has a Retrobulbar Abscess, an abscess behind his eye. That's a new diagnosis for my dogs; a word I've never had to google before!
His eye looks like it is going to pop out of his little head this afternoon! Causes of this problem could be related to his teeth; could be a foreign object, like a bone splinter or foxtail stuck in there; could be something much nastier!
He's back home with a major dose of antibiotics and anti-inflammatories. If he doesn't start to eat in 48 hours, he'll be going back to the clinic for more tests, x-rays, surgery, all that fun stuff! If he's not almost back to normal in 1o days, he has a tentatively booked surgical appointment. I'm sure hoping we can cancel that one! 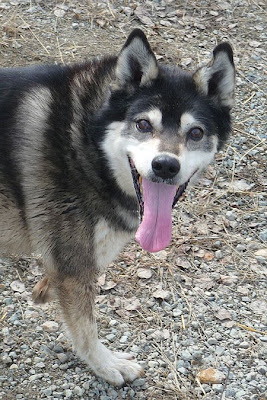 This is what Hobo is supposed to look like...happy, goofy, silly. I won't show you what he looks like today! He's my goofy little guy; the happiest dog in the yard. I've never seen him show so much pain, be so quiet and lethargic. I've seen this dog with massive, life-threatening injuries and never heard him complain & he was still trying to wag his tail. Hopefully, the meds will kick in soon and he'll be doing The Hobo Dance of Joy for no apparent reason again!