The little wandering spirits, also known as Finnegan and Four-by, have been reunited with their owner. I had emailed their description to CKRW yesterday. This morning, the owner called Trader Time and was given my cell number. Ya gotta love small town, community based radio! The dog's owner picked the boys up this afternoon. They were very happy to see her and vice versa. They were obviously well cared for, well socialized, loved dogs! They were just being huskies--saw a chance to run and took it! I'm glad they had a good place to go back to--I liked them very much, but I really don't need 25 dogs
Posted by Wandering Spirit Kennels at 7:06 p.m. 2 comments:

Anybody missing a dog or two?? 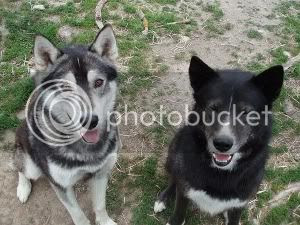 I picked up these two handsome fellas on my lunch break today. The little grey guy was laying in the line of traffic on Long Lake Road. I thought he was hurt so rather than swerving around them, like the other cars did, I stopped. He does have a minor paw injury, but that did not stop him and his buddy from jumping into my truck! Both young male, unneutered husky crosses, no id on their collars. No one has reported them missing to the usual places one would report such things!

I don't think they've been on their own for long. They look healthy and well cared for, but they were hungry. My treat stash in the truck is gone! They are now safely enclosed at my home. Pacer, much to his delight, has been kicked out of his pen. He hates his pen! 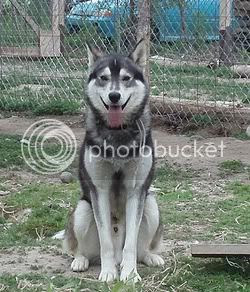 They are a happy pair of well socialized dogs. This one is a big suck! Can't get enough attention. He's a leaner and he paws at me when I stop petting him. 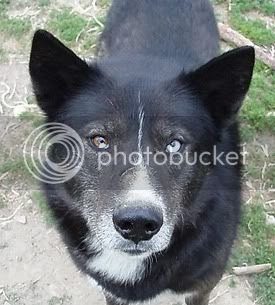 His bi-eyed buddy is more aloof, but still very nice. He seems more confident and maybe the dominant one of the pair. They are clearly a pair though, very bonded.

So if you know anyone who might be missing these beauties, drop me an email. I've listed them with by-law, both vets, and the humane society. I hope they have an owner out there somewhere who is looking for them. I hate to think of someone else going through the same misery I did when Delta was AWOL! If they've been dumped, they are welcome to stay here, although they will be getting the big snip asap if they stay!
Posted by Wandering Spirit Kennels at 7:48 p.m. 4 comments:

Kayleigh's adventure on her walk today: 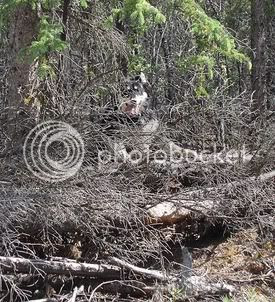 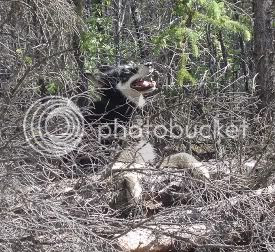 "Seriously, Mom, I'm stuck! How bout lending me a hand, instead of standing there laughing at me?" 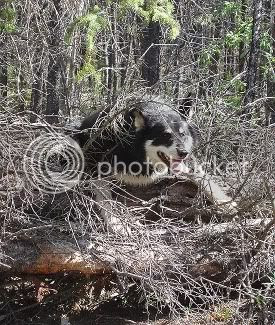 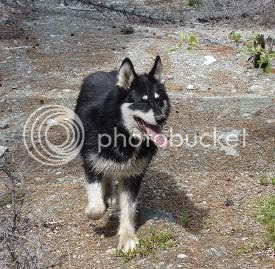 And she did just that, without any help from me. It's hard to laugh hysterically, snap pictures and help all at the same time!
Posted by Wandering Spirit Kennels at 5:49 p.m. No comments:

And then there was Chase...

On June 22, 2003, I dragged a terrified young husky cross out of the shelter. It took a group effort to get Chase into my truck. There was no way he was leaving the shelter. He knew the routine and it was not his turn to go for a walk! He was not going with me. He knew me, but the shelter was the only home Chase had ever known. For close to 18 months he called the shelter home. He came in as a young puppy, past the cute, quick adoption stage of puppyhood, but still just a baby, already damaged by an unkind world. The couple who found him had spent days trying to catch him. He promptly escaped in the shelter parking lot and spent several more days on the loose. He is aptly named! 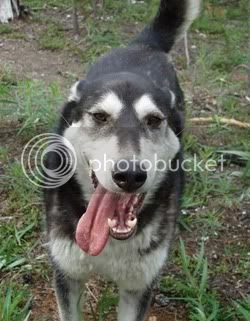 Growing up in confinement does funny things to a dog. In Chase's case, I swear to God it made him stupid! He's the sweetest dog who ever drew breath, but somedays I'm suprised he remembers to breath on his own! Not all the wires connect upstairs! He's not all there. I used to think maybe his brain would turn on after he'd been here for awhile and got adjusted to a home. Now I realize that he just wouldn't be Chase if he was smart! He's my doofus and I love him that way! 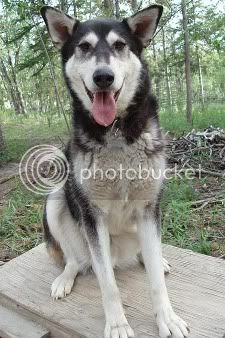 He is a handsome boy too! And that smile will melt the coldest of hearts! Chase is full of joy and love. He is happy about even the little things. Just the sight of one of the people he loves is cause for much barking and dancing around--even if he does crash into a tree occasionally while dancing! 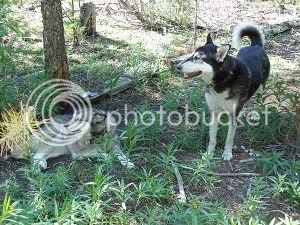 Chase is the best thing that ever happened to Goldie. They are a canine love story. Ever thought that dogs don't form emotional bonds to each other? Come see these two! They are only apart when Chase is in harness. Goldie was forced into early retirement by some health issues and can not run in the team. Chase is a great wheel dog, but when he's done working, he wants to go back into his pen with his girlfriend. They look ridiculous together. Goldie is short and fat. Chase is long, lean and has legs that go on for miles! He's 100 times faster than she is, but when out for a walk, he never leaves her behind. Goldie was a lonely, isolated dog before Chase. She is fussy, to put it mildly, about her doggie friends. She is much happier now that she has Chase...So am I.....

Earle, the last puppy we ever owned, turns 7 today! How the heck did that happen? 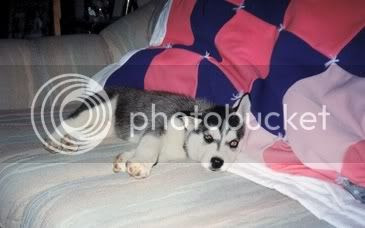 How did he go from this little cutie... 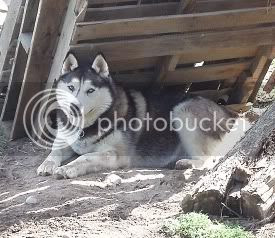 to this big beauty so fast??

My life would be so much easier if all my dogs were like Earle. He's not very bright, but he is sweet as sugar! Earle never causes much trouble. He gets along with all the other dogs. He plays nicely with dogs he mets out on the trails. He likes people and is very gentle with even the smallest of children. He comes when he's called, doesn't mind sharing his food and toys. Earle was actually only our second dog. He's been very understanding about all the new additions. Earle is the dog a newbie meets first, even the timid ones aren't afraid of Earle! He's even good with the cats. But where would the challenge be if all the dogs like that??? ;)I'd probably get bored and have to go adopt a troublemaker!

To prove he really is a husky though--he does like to dig ALOT! 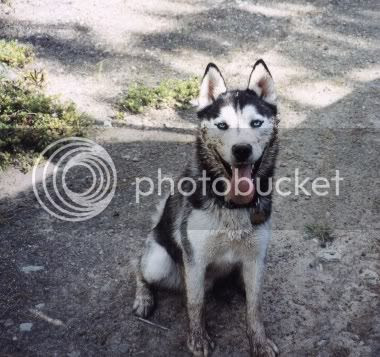 Digging is fun, especially in mud!

Taking advantage of the weather.. 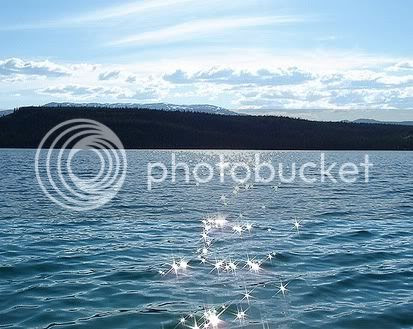 It was a perfect night for a paddle! Beautiful, balmy temps, just a hint of breeze, clear skies and for some bizarre reason, no other paddlers on Chadburn Lake! I thought it would be a busy place tonight, but other than a couple kids swimming it was empty. 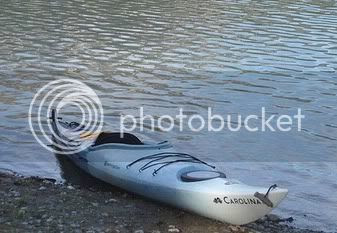 My boat, a Perception Carolina 14.5. No reason for that picture, I just love that thing! 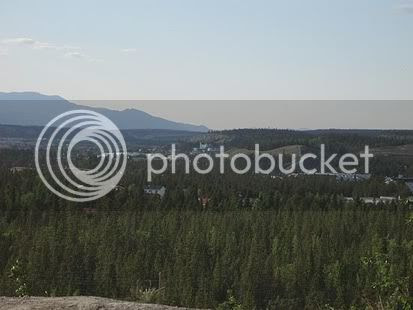 My home, how can you not love a city where the trees still hide all the buildings!??
Posted by Wandering Spirit Kennels at 11:11 p.m. 1 comment:

While out paddling M'Clintock Creek.. 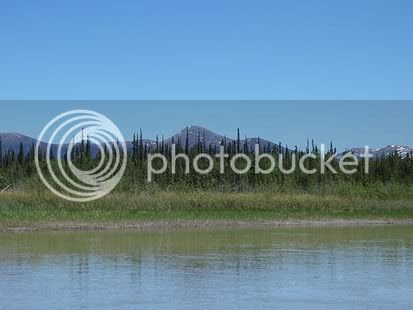 On an absolutely perfect Sunday afternoon, I was joined by this handsome fella: 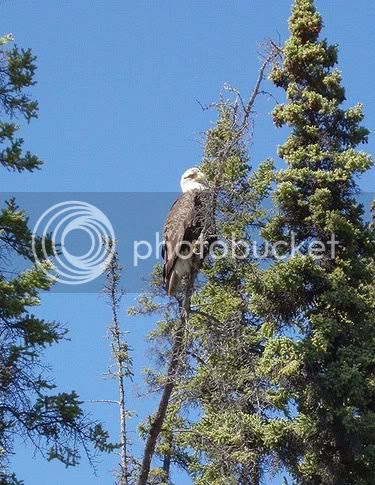 He was a very patient eagle. Still sitting there when I came back down the creek over an hour later!
Posted by Wandering Spirit Kennels at 9:46 p.m. 2 comments:

Please allow me to introduce my new Beau! 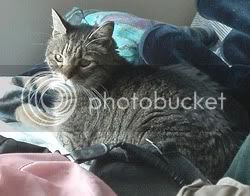 Handsome isn't he? He is also proof that I should not answer the phone when I see the Humane Society phone number on the call display! My first call of the day at work was from one of the shelter attendants..."We have this old cat...you've taken a senior or two before, right?" I am a sucker in general, but old cats are an even bigger weakness! 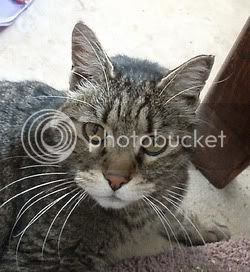 Beau is at least 13. The shelter staff pulled him from the city pound this morning, where his owner had left him to be euthanized. Not sure what the rest of the story is. He was seen by my vet this afternoon. He has some mild kidney problems, as so many older kitties do, but he's in pretty good shape overall.

He's very laid back and sweet. Full of affection, headbonks and purrs. He drools while he purrs. Stuart will love that! He hates cat drool!! 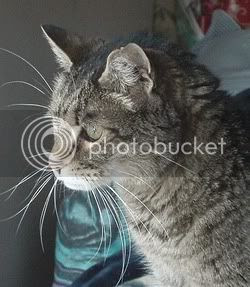 How the huskies spent their weekend...

If you've ever looked at a Husky rescue site, you've probably noticed a section titled something like "so you think you want a husky...". That section goes on to list all the things that huskies do simply because they are huskies! My dogs excel at most of those things and even provided photographic proof for the Harnessed to Hope Rescue. http://www.gimpydogs.com/huskybreed.html

The dogs spent the weekend indulging in their favorite spring activities: 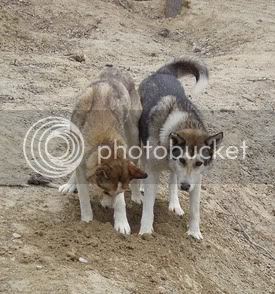 Digging--Teamwork is very important for a sled dog! 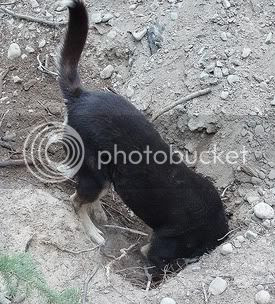 Chum is more of a solo act! 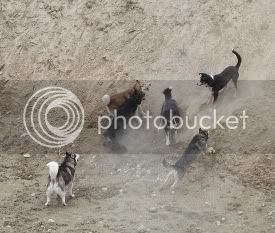 There's nothing quite like watching a big pack play! They sound like they might killing each other, but they have a great time! They even entertain the neighbor's dog, Daisy, who spends most of her time with us! She's the curly haired black and brown dog in the picture. 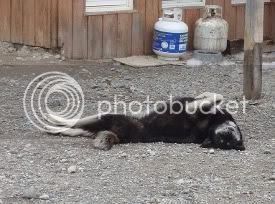 Franklin continued to work on his tan, despite the dreary weather!
Spring also means that there is fur freaking everywhere! Just about everyone is blowing their coats right now. Big tufts of fur all of the place! 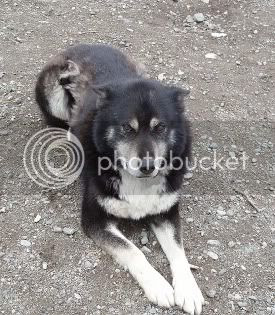 Delta shows off the coat that helped him to survive a month on his own! He has the most spectacular coat! I'm saving their fur for a friend who spins it into wool!
Posted by Wandering Spirit Kennels at 9:45 a.m. 3 comments: