A little over six years ago, a scared little shadow of a dog entered our world. We called Pacer "the ghost dog" due to his solid white coloring and reluctance to have anything to do with people. He lurked on the fringes of our lives, too scared to get too close to anyone. 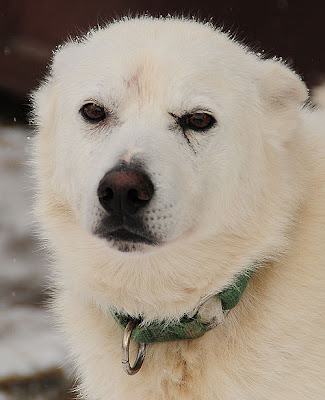 Then about four years ago, Pacer ended up on the bottom of a pack fight and almost lost his life. It turned out the be the best thing that every happened to him. For six weeks, his options were put with me tending to his wounds while being forced to live inside or die. Pacer may be shy but he's very bright and he knew I was trying to help, even when it hurt! 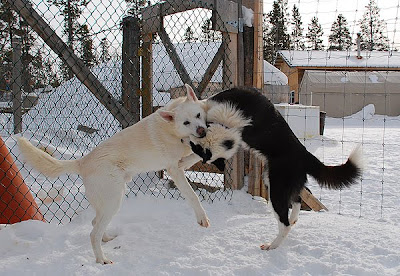 Pacer started to unpack his baggage as he recovered. He decided to remain a house dog, sleep on the couch; he does have his own pen to protect him when no one is home. He's a much happier boy these days, especially since Tehya arrived. She has taught him the joy of Husky WWF playtime! 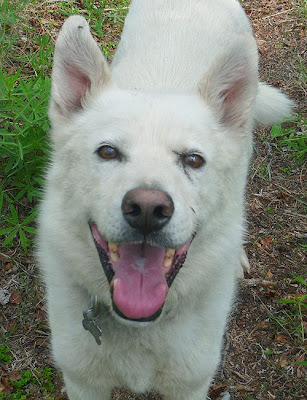 Tehya has recently been freed from her crate at night. Most nights she ends up on the bed. She likes to snuggle. In the wee hours this morning, I felt a little husky sneak up on the bed and snuggle up beside, sharing my pillow...one of Tehya's favorite tricks. For several hours I slept hugging the little dog I assumed to be Tehya. Until the alarm went off and I discovered it was Pacer snuggled up to me! 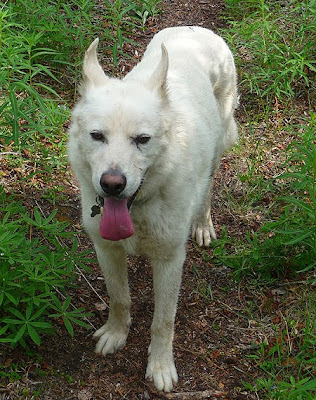 Oh, how far we've come my little devil dog....from living on the fringes of the yard, to reluctant acceptance of contact, to snuggling on the bed! And it only took six years!
**Devil dog comes from his ears...his behavior is not devilish at all, but when he's happy and relaxed his ears look like little devil horns!**

Had I been thinking with my head instead of my heart when I was bringing most of this pack home a few years ago, I would have thought "hey they are all going to get old at the same damn time; maybe I should space their ages out a bit?" Alas, I did not think that and probably wouldnt' have changed a thing even if I had thought it! So now I have a rapidly aging pack that while still mainly healthy is starting show signs of it's age!
Life was not kind Goldie for her first few years, so she may seem even older than she really is. Goldie is a tough dog; a sweetie at heart, but one who bears both physical and psychological scars from her early years. Goldie has one true friend in the whole pack, her beloved Chase; she doesn't like other girls and she is not fond of cats; she spent over two years in the local shelter; she has badly bowed front legs, likely from poor nutrition as a wee puppy; she has been on pain meds for many years due to an old pelvic fracture that was never treated and healed incorrectly. Goldie is tough, but she also loves to be hugged by her people, adores her Chase, delights in a good walk, and never ever lets anyone or anything in her driveway without warning me that something is coming. She even has different barks for strangers, people she likes, loose dogs and moose. She's a good girl.... 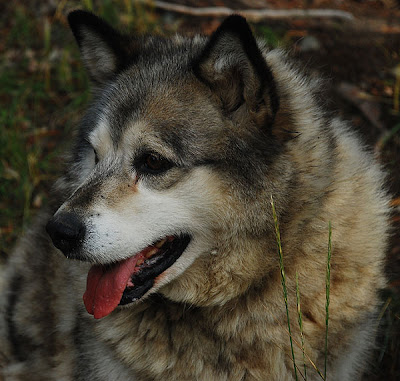 Unfortunately, she's a good girl who is full of cancer. Goldie was diagnosed with bone cancer today. The tumor covers most of the right side of her rib cage. It is not removeable. Surgery is not an option. We have decided not to subject her to any further testing or procedures. Her prognosis does not change in any case. 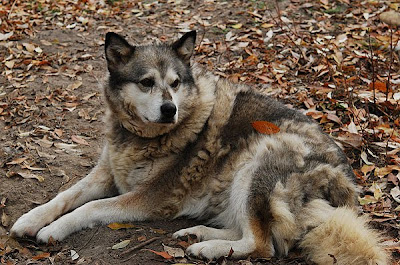 We are adding a second pain medication in the hope of keeping her comfortable for as long as possible. Goldie has known enough stress and pain in her life. Before it ends, she will know only safety, security, comfort and love, from her humans and her special canine friend, Chase.
Posted by Wandering Spirit Kennels at 10:54 p.m. 6 comments: