We said goodbye to another pack member this weekend.
Heyoka has been here for ten years or so.  He wasn't the kind of dog we normally took in; he was very adoptable, but Stuart fell in love at first sight and decided we deserved an easy dog for a change.  Some guilt went with that decision which led to us also adopting Raven, a far less adoptable, long term shelter resident, on the same day. 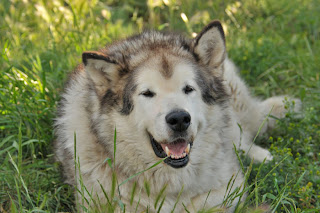 Heyoka was in many ways an easy dog.  He was the anti-malamute.  He had none of the traits that make malamutes so difficult at times.  He didn't eat cats; he wasn't same sex aggressive; he was reliable off leash and obeyed most commands.  He also had no work ethic and my attempts to turn him into a working sled dog were futile.  He was a pet, a delightful, happy, goofy, pet. 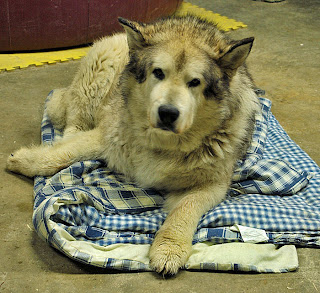 His name meant clown who teaches or a shaman who does everything backwards.  It fit him perfectly.  He was a clown.  Silly and happy all the time, even as he aged and his body let him down, he remained happy.
Heyoka's health has not been great for much of his life.  He was a shelter dog but we know who bred him, a lousy backyard malamute breeder who bred solely for size & did not care about the overall health of his dogs.  Heyoka paid the price for that negligence.  A couple years ago we took Heyoka to Anchorage for surgery on his throat.  He loved being an only dog for a week and we are forever grateful that he had over 2 years able to breath with ease!  His spine started to degenerate several years ago.  He occasionally had difficultly getting his legs to do what he told them!  With help from our wonderful vet and good chemistry, he was pain free and mobile.
Three weeks ago, Heyoka refused to eat and was working hard to breath.  His throat surgery left him at high risk of aspiration pneumonia, which he did have at that time.  Unfortunately, we also discovered that he had lymphoma.  He'd probably had it for a long time and the drugs we gave him for his other issues controlled the symptoms.  We elected not to try chemo.  Heyoka was not young dog and was not healthy to start with.  He also truly hated the vet clinic.  He had no problem with the doc, but he fought going in her building with everything he had!  Putting him through the stress of very frequent clinic visits didn't seem worth it.  We elected to keep him comfortable for as long as possible.  Unfortunately, it wasn't very long. 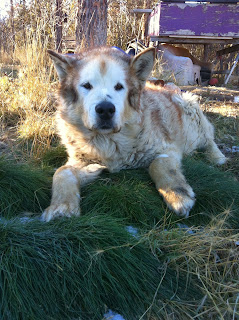 Saturday morning, Heyoka was lethargic and refused to eat.  Heyoka always delighted in food.  We always assumed he needed immediate vet care if he didn't eat.  Our vet found he was running a very high fever.  She gave him a couple injections & said if he didn't respond in a few hours, we would have to make a decision.  We knew leaving the clinic the end was near for Heyoka so we spent the afternoon enjoying his company on an unseasonably warm day.  That evening we let him go, surrounded by the dogs, cats and people he loved and who loved him.
I miss everything about him...his big raspy wooo, watching him chase his own tail, listening to his gentle snore, big dog cuddles on the couch, the way he bounced waiting for his dinner.....the list is endless.  There will never be another like him.  I am heartbroken & so glad we broke the rules and took that "easy" dog.
Every dog leaves a hole when they leave, some  bigger than others.  Heyoka leaves a hole several times bigger than his 130 body.  ﻿
Posted by Wandering Spirit Kennels at 5:13 p.m. 4 comments: