The plan was no new additions for awhile..the inn is full.....but you know what they say about the best laid plans.... 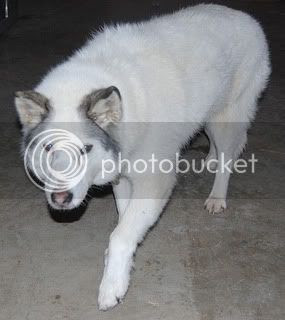 This sweet ol' girl joined the pack on Monday. I've known Pirate for a couple years at least. She's lived with a couple people I know, most recently just down the road from me. But Pirate is old, needs some serious care and I guess that just doesn't mix with a fancy house. I can't quite get my head around that, especially since her problems are treatable or at least manageable. Maybe I don't want to understand how anyone can leave an old dog out in the cold.

Pirate is 12 years old according to her shelter file. She was originally surrendered by the same musher who brought Anvik in. He arrived a few months after Pirate. Pirate is a stiff in her back end, her eyes are cloudy and she doesn't hear much(although some of that I think is the famous husky selective hearing!). She leaks urine when she sleeps--not unusual for an old, spayed female canine. Not that unusual for females of the human variety either! I expect that most of us when we are pushing 80 will be in much the same shape as Pirate!

But her blood work is phenomonal! She has the kidneys and liver of a much younger dog. Her heart is strong and steady. Her urine is normal, just won't stay where it's supposed to! She got a full exam this morning by Dr. Rick and he has provided some options to make the ol' girl comfortable and dry! She's on medication for the leaking and anti-inflammatories for the stiffness. They should both start to work very quickly. She is not ready to move on and can still have a good quality of life for some time! 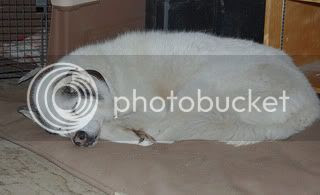 She's taken to this "inside dog" thing like a pampered Pomeranian! She loves her crate and goes right in. Ya gotta love a husky's denning instinct, especially when it makes training easier instead of making 10 foot holes in your yard! Her hip movement has improved dramatically already just because she has a warm soft bed to curl up on. She can almost run when she's heading for the door to come in for the evening! It's no sprint racing dog speed, but it's a pretty good clip for a 12 year frieght style dog!

She may not have years, but she will be warm, safe and spoiled for whatever time she does have left. Welcome to your retirement home, Pirate!
Posted by Wandering Spirit Kennels at 9:22 p.m. 10 comments:

Today is my Dad's birthday. I won't say how old he is, but he is officially eligible for all the senior's discounts now! 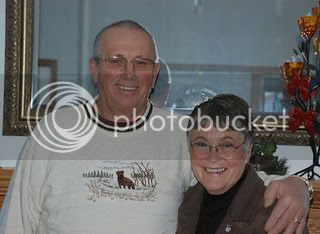 Happy Birthday, Dad! There never was a better Dad! Love you, miss you.
(No, my Mom is not short, my Dad is just that tall!)

Much to his delight, I'm sure, Dad shares his birthday with one of his furry grandkids--Franklin is eight today. 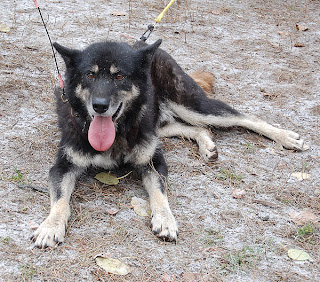 Hard to believe that the confident, happy dog currently sprawled on the couch is the same dog as the scared, scrawny mutt who first showed up here almost six years ago. You've come along way, baby!

Franklin sends birthday greetings to his sisters George, Lucy and Gracie who live with Stacie, or allow her to live with them!
Posted by Wandering Spirit Kennels at 7:26 p.m. 5 comments:

Heaps of it! Fluffy white stuff. Finally. It's still coming down. At last there might be enough to not only run the team, but actually stop them! Maybe even get a hook to hold so I can correct a few things or offer assistance! Although, they have got good at taking care of their own minor tangles!

The bad part of this lovely winter wonderland....it required that I plow the driveway and at least part of the yard. The gates don't work so well with snow build-up and those of you with huskies will know it doesn't take them long to figure out that they can get out! I was almost done, just a couple more passes in front of the shop, when the ATV made a very nasty noise and blue smoke came out! That's never a good sign. I think I dropped the tranmission!

The ATV is 24 years old, yes you read that correctly. It's an 84 Kawasaki Bayou. It's a workhorse of a machine and really it owes me nothing. But I can't afford a new one or even a new to me one and paying the bobcat guy 60 bucks an hour doesn't appeal to me all that much either! Although I am calling him in the morning! I sure hope Stuart can fix the ol' girl when he gets home! Too bad he's not home any time soon!
Posted by Wandering Spirit Kennels at 9:47 p.m. 3 comments:

There's a lead dog in her somewhere....

Tehya wants to be a lead dog; she's got the brains for it; she likes running out front; she likes being the boss. Unfortunately, she has a serious case of puppy brain still! I put her up front today for the first time on the sled. It did not go well. She wandered a bit and then repeatedly tried to turn around and play with the other dogs! Tangles are not a good thing ever; they are particularly bad when there isn't enough snow to set a hook! I suspect that Little Miss Thing knew I couldn't get off the sled to correct her and she took full advantage! Lead dog training for Tehya is suspended until further snowfall! She's a swing dog for now! 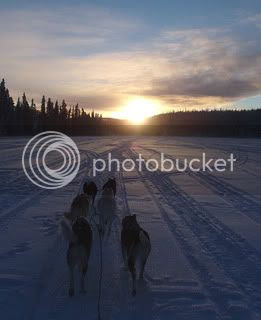 This was taken while crossing Mary Lake this morning, before Tehya's brain kicked into puppy gear again! Running into the sunrise was worth the frustrating run. After all, any day on the runners, even a bad one, is better than a great day just about anywhere else.
Posted by Wandering Spirit Kennels at 5:57 p.m. 3 comments: