Earle got to come home on Sunday evening. He wasn't eating yet, but he was pretty anxious to get out of the clinic. Apparently, he was becoming quite vocal about his unhappiness with his confinement! 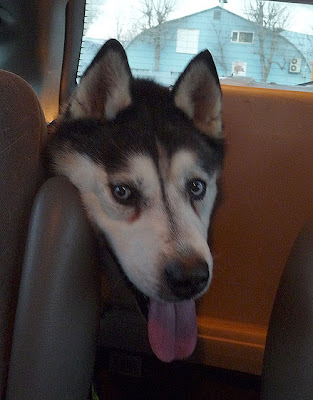 So we decided to see if he would be hungrier at home. It didn't work on Sunday. He was happy to be home and the other dogs were truly thrilled to see him. There was none of the usual "you smell funny" stuff. They took turns sniffing him; licking his ears, and snuggling with him. But Earle wouldn't eat yet. 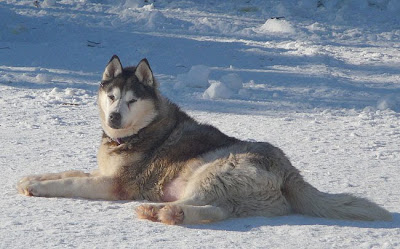 Monday Earle started to eat, not much and only if he thought another dog was about to steal his food, but at least he got a bit of nutrition into him! It had been a full week at that point since he had eaten anything! Today he ate breakfast because he just couldn't let Franklin have it! Tonight he wolfed down his dinner, without competition for the bowl! He was actually hungry!
He's not 100% yet, but we did come very, very close to loosing him so it may be awhile before he's fully back to normal. He'll likely need a special diet for the rest of his life, but he seems to like the low fat, easy to digest food. We are thrilled, deeply relieved, and happy beyond words that he's still with us and appears to be on the road back to health!
Posted by Wandering Spirit Kennels at 7:50 p.m. 6 comments:

Acute Severe Pancreatitis...that's what Earle has! 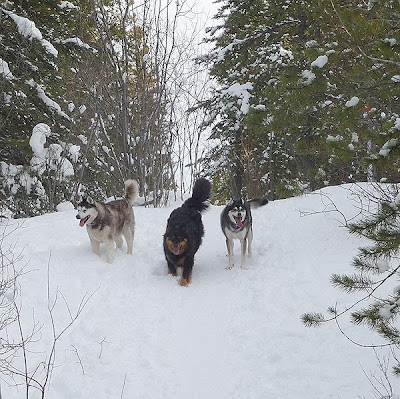 Monday he was a healthy, happy boy. He even came for a big walk, playing in the snow with his buddies, Daisy and Hobo. 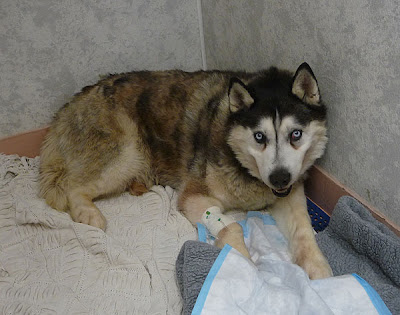 Tuesday morning, he started puking and by Wednesday morning he couldn't stop puking, wouldn't drink anything, refused to stand up on his own, was essentially unresponsive to everything around him...conscious, but didn't care one bit about anything. The diagnosis, acute severe pancreatitis..a very painful, potentially life-threatening condition.
After two days at the vet clinic, on a constant drip of IV fluids, pain control and anti-nausea medications, x-rays and an ultrasound... 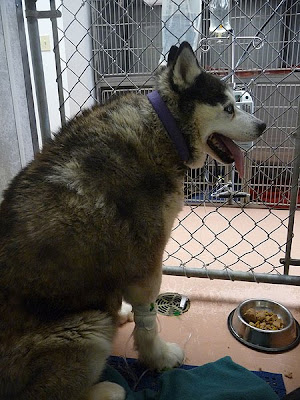 He's improving. Not himself, but responsive again. He ate a whopping 3 tablespoons of food this morning, kept it down and then refused to eat another bite all day. He can't come home until he is eating and drinking on his own and most importantly, keeping it all down! 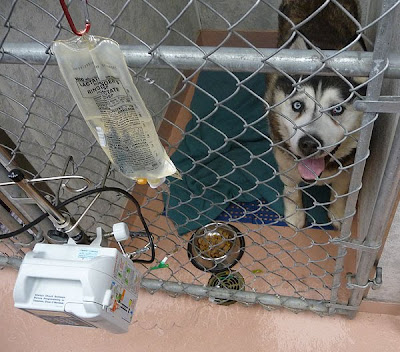 Maybe tomorrow he'll get released from the doggy ICU!

A little over four years ago, a timid grey dog arrived in my world. Sundin's mother, Pingo, already lived here. I was told they had similar temperment, a bit spooky, but sweet, smart dogs. Sundin is sweet and smart, but he is pathologically timid. Terrified of everything, trusts no one. I put him in the smallest pen I have in November 2005; I did not touch him again until February 2006! He was completely uncatchable. From that first contact til very recently, Sundin would occcasionally decide that he wanted to run. He is confinent and reliable in harness. He came from a distance musher and has been to races all over North America. 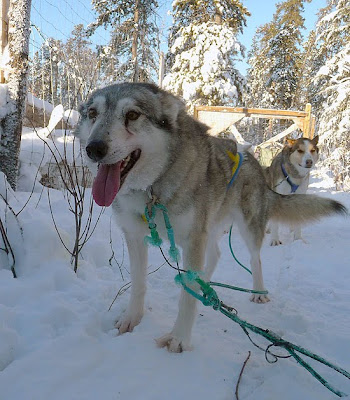 We reached a mutual understanding. I wouldn't push him too much; he would occasionally let me pet him or put him in a harness. Last winter, Sundin showed me that he does trust me when he has to, like when he's badly injured and needs assistance. He knows who to turn to when he needs help. After he had recovered, our relationship returned to it's status quo. 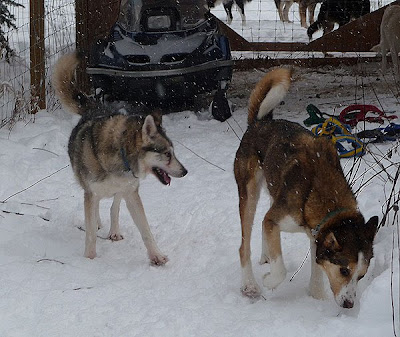 Until three weeks ago, when something went click in Sundin's little canine brain. All of the sudden, he decided that he likes me; he likes sleeping in the house; he loves having his ears scratched and he'll run every time I hook a team up. I even get the occasional little kiss while I'm putting his harness on! He can be loose in different pens; I can catch him without trapping him or luring him with food. Like a normal dog, "Come here, Sundin" actually gets him to come here!

Apparently it takes four years, three months and two weeks for Sundin to unpack and decide to make himself at home! I just wish I knew what it was that made the click happen! I would have done it a long time ago!