When did that happen...

Sometime while I wasn't looking, Paxil got old. How did I miss that!?? 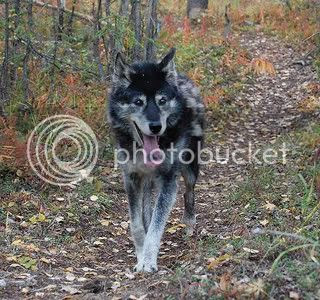 I took her for a walk tonight with Tehya. Probably not a great mix, but there is so much I'd like Tehya to learn from Paxil. We went maybe four kilometres. That was probably as far as she could go. Tehya knocked her over twice acting like, well, a young dog! I called her a hooligan, but she was really just being Tehya! Getting up the big hill on the way home took two tries. There's no way she'd get up that hill leading a team. 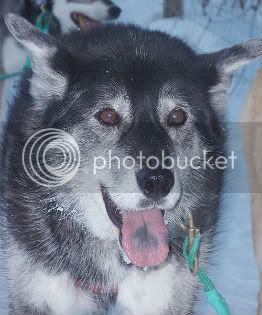 In her prime and well beyond, she was the best damn lead dog ever---unfailing, strong, smarter than her musher, always reliable and willing. The first dog team I ever ran was lead by Paxil. Last winter her tug line wasn't always tight and she had slowed down, but she still wanted to go and she never missed a command, unless I was dead wrong and told her to "gee" when she knew I meant "haw". I suspect she will still want to go this winter(this fall even when I get brakes on the quad again!). She will be seriously ticked when I leave her in the yard! I'm gonna hear all about how much she hates retirement, so will everyone in the subdivision!

I will hate her retirement almost as much as she does! Her lead dog booties will be hard to fill!
Posted by Wandering Spirit Kennels at 9:14 p.m.

Yeah, I hear ya! Poor Paxil, getting older sucks! You'll just have to make it up to her by doing the "geriatric jog" or something for the oldsters, which I'm sure you're probably already planning. I did that with Kate and even took her up and down the road skijoring her last winter, she didn't pull much, but she felt useful!

But yeah, those first few runs without them are hard, on them AND us!!!

It is sad to see our dogs slow down and lose their vigor.

We have given your wonderful blog an award -- stop over and say hello!

Gettin Old ... it's the pits for the 4-Leggers AND the BiPeds.I'm very thankful that The Mutts don't try to 'show Dad up' too often when we're out in public!

It makes for a sreious RED Face when the Mutts can easily outlast ole Dad on a hike.

I keep thinkin it's past time to get that Lil Red Wagon - and Harnesses for the Mutts.

Sooo ... a MOST HAPPIE BIRTHDAY WISH to our Favorite Musher, Kat & Husky Mom!

Maybe she just needs her own mini sled to pull. Maybe the khats can be her sled occupants.

She is still quite stunningly beautiful!

Oh, Paxil... you may be getting older and slowing down a bit, but you are beautiful!

Paxil, even now woo are such a beautiful sibette. Just tell that little whipper-snapper Tehya off, she's a smart little thing, she'll get the message!