Every year around the anniversary of Hoodoo's death, I take a team and run the last trail he ran with us. Every four years, I go on the actual date, February 29. I've always thought that Hoodoo probably got a little giggle out of leaving on a date that only happens once every four years. That dog was a trickster. 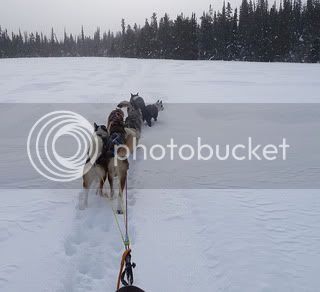 Hoodoo's last run involved crossing this field. I have no idea why there is a big open field in the middle of the forest, but it's there and no trees ever seem to grow in that area. This is about where Reggae said screw it for today. Reggae does not like having to break trail, make his own, decide which snowmobile track I meant when I said gee. He likes clear, well marked trails; he likes his commands given quietly and early. As soon as he can see a possible turn, he wants to know what I want. We were running into the wind and drifts today. Not Reggae's favorite thing. Just after I snapped this, he did a flawless come-around-haw, through snow up to his chest, he turned the entire team, without a tangle, without letting Ozzy get close enough to cause a ruckus with Anvik. It was a thing of beauty. 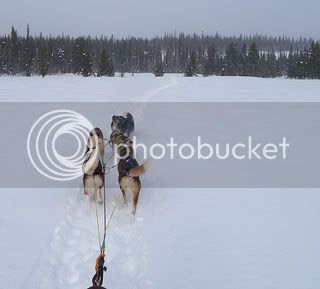 And we ran the rest of the way home on the trail we'd already broken. Hoodoo would have appreciated that! He loved to tag along for a run, but he never liked to do anymore work than absolutely neccessary. He had mastered the art of keeping his tug line tight enough that it looked like he was doing something, but not so tight that he was actually working! 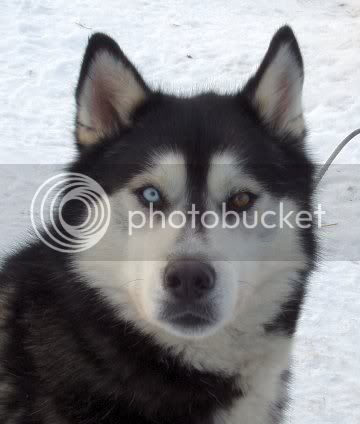 Here's to Hoodoo and his spirit keeping an eye on all of woo!

But he isn't saying which eye it is!

What a beautiful boy Hoodoo was. I bet he's watching over the team! And maybe even helped Reggae out with that turnaround! That was awesome. What a nice surprise. I bet Ripper would do the same thing - he HATES breaking trail too. He will absolutely refuse to do it. He doesn't see the point of going out if you can't run as FAST as freakin' possible! lol

I'll bet Reggae had some help with that turn ...

I'm sure that Hoodoo was running right
beside him and whispering suggestions.

THANKS for the help, Hoodoo -
we'll look forward to joining you on
the Memorial Run next year.

Excellent job Reggae and excellent coaching Hoodoo. We love the spirits of the elders teaching the next generation.

Such a beautiful place for a run, no doubt Hoodoo's spirit is close by, just one more "wandering spirit" in your pack. Such a handsome boy!

Woos,
Star & Jack
(Please give Muskwa & Earle an extra hug from our mom, in remembrance of Hoodoo)

Doggers, I'm glad you and your mum had a good run in Hoodoo's remembrance.

Ah Hoodoo was such a handsome creature.