Some overdue updates on the patients around here: 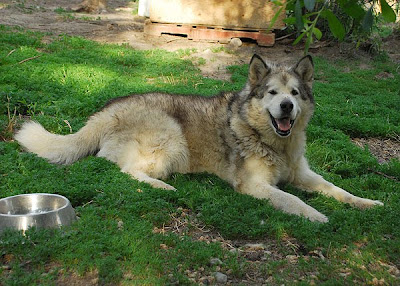 The mystery lumps in Heyoka's throat remain just that...a mystery. We can't get a decent sample for a biopsy, even when he's knocked out; they are just too far down. He sounds like a chainsaw when he breathes, especially when he's relaxed or asleep. Some nights I get up and move his head in a mostly failed attempt to lessen the racket! He seems unbothered though. He's a little slower, a bit less rammy than he used to be, but he eats like a pig, fence fights with Deuce, chases his tail and still enjoys a good belly rub. He remains, for the most part, the giant goof he's always been. Since his diagnosis remains a mystery, his prognosis is mysterious too! 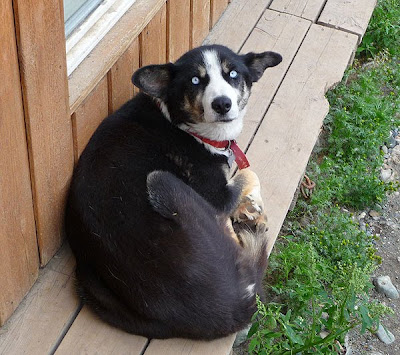 Chum is holding his own in his battle with liver cancer. He's a bit underweight still, but he is eating. If you didn't know how Chum used to be, you would be hard pressed to tell how sick he is. Seems a bit ironic that for six years every day I told that dog to settle down and shut up and now I'm thrilled when he growls and runs a bit!
Prednisone and Tramadol are working their magic. It is painfully obvious when he needs another dose of Tramadol. He's turned into a total house dog and a snuggly little guy. Chum has always been the only dog allowed to sleep on our bed. He is supposed to stay on the corner by my feet, but he has managed to take over much more room than that lately. It did not take him long to figure out that the rules don't apply to the terminally ill! He is on borrowed time, but we will borrow as much as we can. 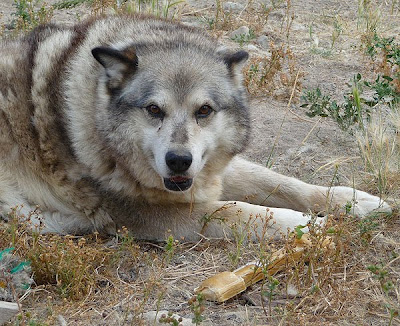 Goldie is also waging a battle with cancer, although her diagnosis isn't as definative or as dire as Chum's. She has a large lump, rock solid and firmly attached to her rib cage. There really isn't a thing we can do about it. It's not removable. Goldie is already on anti-inflammatory painkillers for chronic shoulder and hip pain. She is still content to boss Chase around, hog all the rawhides and bark at the new neighbors! 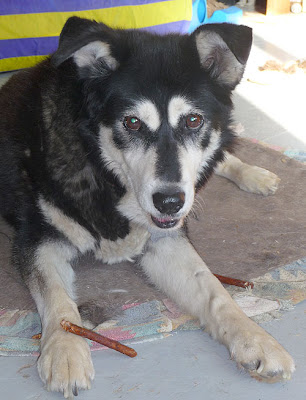 And Sweet Sleet...She's not really ill. She's just ancient. She is well into her 15th year. Her advancing age becomes more obvious all the time. She is stiff with a weak back end and she prefers to spend her days on her favorite blanket. Her dinner bowl hides a couple different medications! She's still fiesty though..no young punk dog is coming between Sleet and her treats. She showed her vet a flash of teeth and 'tude earlier this week when she objected to a blood draw! When you are ancient your vet comes by alot!

I think that's all the patients right now, at least the canine ones!

Thanks for the pup-dates. And keep up the good fight, all of you!

I was just thinking about Heyoka this morning! I was going to email you later today to ask about him. Good to see his big fuzzy self again.
Hope all of you have still have many good days together.

Mom and I understand about Sleet!

Kyrye will be 15 next month - and she shares some of Sleet's issues. She still has her own fiesty spunky times when she's not napping!

Once again, tank woo fur taking such good khare of 'us'!

Big hugs and big prayers for ALL the patients and their mom!