Now don't get me wrong, we adore Chase. He is a sweet, gentle lovely dog who is the best snuggler in the pack. However, he is truly a dumb dog. As his Uncle Nick used to say, Chase has a loose wire upstairs. Something just doesn't connect! He would loose some of his charm if he was a genius dog anyway! 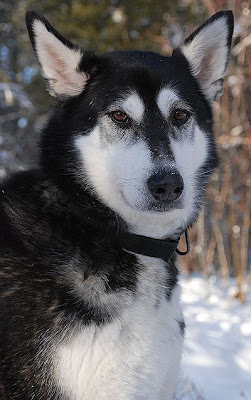 But every once in awhile, Chase shows a flash of brilliance. Tonight when I got home, Chase was in the wrong pen. He lives with Goldie in their own pen. Chase is the only dog Goldie will tolerate on a full-time basis. He's not bright enough to be dominant! Goldie likes a boy she can boss around!

Chase has figured out that he can use his extraordinarily long legs and the block of ice frozen into a bath tub that is their water bowl in the summer to launch himself over the fence! Fortunately, that just puts him in a bigger pen and Chase gets along with everyone. He had a self-scheduled play date for the afternoon!

Of Course he's not smart enough to figure out how to get back into his pen and was a bit stressed about being seperated from his girlfriend.

He's no genius, but maybe he's not quite as dumb as he appears!

Hey - not everydog can be First in the class!
At least he whent where he's *welcome*!

He would get on well with Khousin Merdie!

Tank woo fur sharing this snippet of his life!

Don't worry, Chase, brains aren't everything. Your smart enough, and oh, so handsome!

Mum says I am blonde underneath my black fur Chase, so I understand.

Well, like maw says about my brudder Nikita, " No brains, all braun". Haroooooooo!

PeeS: Chase, woo need to git one of da udder dogs to give woo a boost back ofur.

Dumb is perfectly ok. We have Samuel after all, and the human woman seem to really LOVE him!

Awwww, sweet Chase! You're so handsome and I'm glad you had a fun play-date! Mum will always help you back to Goldie.