Four years ago today, I walked into the shelter to meet a stressed out sled dog; so stressed out the staff thought he was having seizures(those turned out to be just a side effect of his anxiety, not actual seizures). Said sled dog promptly launched himself out of his kennel, wrapped his paws around my neck and rested his little blond head on my shoulder. I have no idea what Anvik saw in me, but from that moment I was his human and he was coming home with me. We had our first and so far only noise complaint that night. Anvik did not like being outside and he let the whole Yukon know about his unhappiness. We hear the Anvik Death Howl less often these days, but it still echos through the forest occasionally! 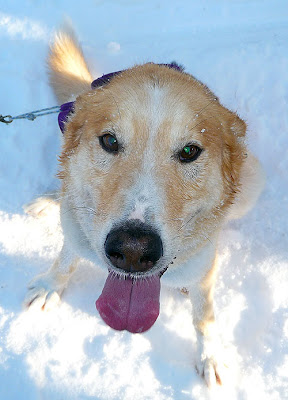 I am quite certain that it was his seperation issues and the Death Howl that lead to his being dumped at the shelter. It certainly wasn't his ability in harness. Anvik is a fine sled dog; always willing, a decent command leader and able to run all day. A tired Anvik is a good Anvik! 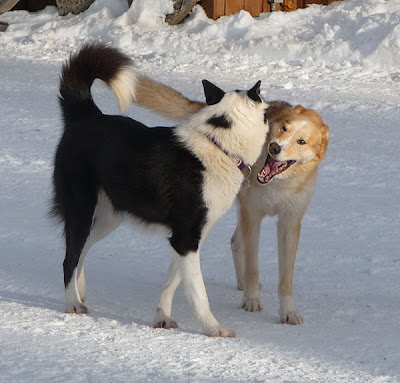 I'm not sure that he likes Tehya as much as she likes him... 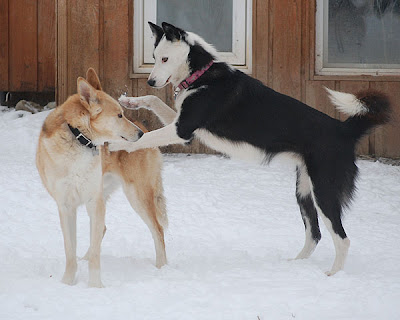 but he is a tolerant big brother! 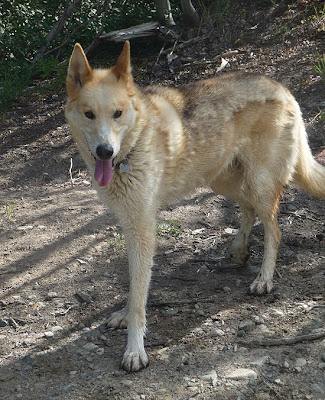 He is still happiest glued to my side, but he has figured out that I come back so he doesn't leap the fence in a single bound anymore or do the Death Howl all day! I regularly get squashed or sent flying when he decided he wants to be a lap dog or that he needs a hug. We make sure he can always see in the house; the doghouses against the side windows are very attractive! He doesn't scream as long as he can see me. Anvik's world begins and ends with me--a bit much sometimes, but sometimes also a nice change from the usual aloof husky personality! Plus it makes him reliable off-lead, a rare trait for a husky. I have never had to call Anvik twice; he always responds the first time he hears my voice! 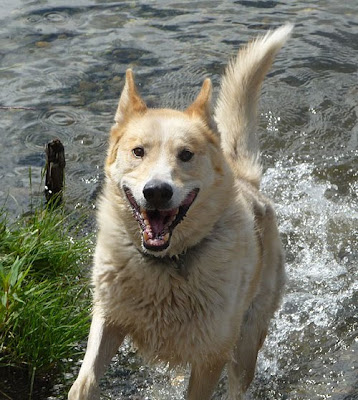 i'd love to have a spitz type trust worthy off lead. way to up the ante, anvik!

Anvik is the reason this human must wash windows whenever I travel North! She is a good dog tho and like a toddler she wants to see "Mom" all the time or at least check that she remains nearby.

We heard the death howl the first time we left Sequoia alone. It sounded like somebody was ripping out her heart out with a rusty spoon. Luckly we have not heard it in 9yrs, although it is still crystal clear in my head.