It's done!  I crossed the finish line under my own power and upright!  I was a few minutes slower than I had hoped to run, but let's keep that in perspective...I ran just over 21 kilometres(13 miles) in 2 hours & 39 minutes.  8 months ago, when I started this running thing, a single kilometre left me gasping for air and I was taking an hour to get 5km finished!  So all in all, I'm pretty happy with my first half marathon! 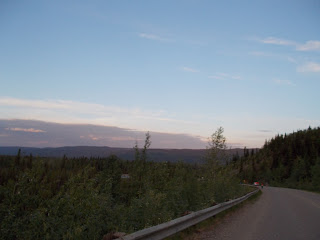 This is where my time went off track!  Kilometre 19 and my legs decided they had done enough!  I was well prepared for this hill at the start of the race. It's an out and back course so this both near the start and the end.  I do lots of hills running around my neighbourhood.  Going up was no problem. I was not prepared for how difficult it would be going downhill with legs of lead!
In hindsight, I don't think I drank enough on the course.  I had way more water left in my bottles than usual & I probably should have grabbed an orange slice or two at the turn around spot.  Lessons learned for next time!  There will be a next time!
The Mayo Midnight Marathon is really a nice event.  Besides being well organized and putting on a killer breakfast feast the next morning, everyone was really friendly.  Somewhere on that hill when I was obviously struggling,  a guy running the full marathon, at about kilometre 40 of his race, slowed his pace long enough to give me some words of encouragment.
A couple kilometres earlier, a lady told me I had a "beautiful pace" and referred to me as "steady eddy" every time she saw me for the rest of the weekend.  She may have a point....my strength as a runner is never going to be my speed; I am not a sprinter, I'm never going to run a Boston Qualifer time, but I am steady!  I settle into my happy pace and I stay there!  My split times are almost always within seconds from start to finish!
Oh, next time.....I just registered for another half marathon in Victoria over the Thanksgiving weekend!﻿
Posted by Wandering Spirit Kennels at 10:13 p.m.

Enjoy it, you should be proud of yourself. :)

Congratulations on your run!!!!! You did really amazing!

I was just happy to get my walk in for 5k and I did a pretty decent pace for recovering from the ankle.

Thanks for saying hi!!