She arrived here almost 10 years ago, a timid little dog, intimidated by those already here who were so much bigger than her!  But she was smart and she adapted quickly.  It rarely takes a sled dog long to learn to love the comforts of the couch after a run.
She indulged her border collie herding dog side by chasing tennis balls and the occasional mountain biker! 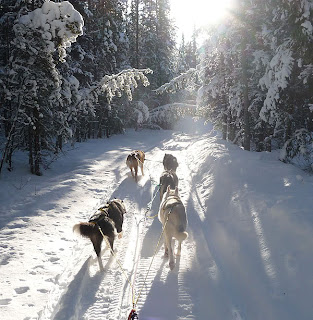 Her husky side thrived as a lead dog in my little team.  She was not a command leader, although she knew all the commands.  Her gifts lay elsewhere.  She was the finest trail dog I have ever known. If she balked at an ice crossing, it wasn't safe. If she refused a trail, even after I raised my voice to give the command, there was a moose on that trail.  She could pick the most solid trail out of a dozen crossing a lake, the fastest way home, the easiest way through overflow.  She may not have always turned where I told her, but she was smarter than me and her way always got us home safely.
For every minute of the ten years we shared & I suspect of the 6 plus she had before she came here, she was a good dog.  She never escaped, never wandered off.  She never fought, in fact, she hid under the deck at the first growl.  She accepted all the newcomers after her without a snarl.  She didn't dig, she didn't bark unless there was a very good reason.  She was mellow, laid back and an easy keeper.  She never caused me any stress and incurred big vet bills. She was simply a good dog.
In her last months, her hard working body began to fail her.  The back that strongly lead a team for a dozen years began to stiffen and ache.  The mind that remembered every curve in every trail began to forget why she wanted outside.  Good pain medications and cushy bed in the living room kept her comfortable until just a few days ago.  She didn't seem to be in any pain, but she was weak and wobbly.  She couldn't chase her beloved tennis balls.  She couldn't get in her favourite dog house or up on the couch.
We tried and hoped for one more rebound, but it was not to be.  Earlier this evening, Pingo was released from a body and mind both no longer capable of keeping up with her spirit. 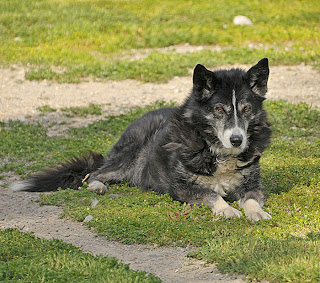 In harness, her favourite command, the one she never ignored, was "Pingo-Pick-A-Trail", when she got to decide where we went.
Wherever she is now, I hope Pingo-Pick-A-Trail is the only command she ever hears.
Run free, my pretty girl.
﻿
Posted by Wandering Spirit Kennels at 11:18 p.m.

Such a beautiful post! I have tears in my eyes. Run free and no more pain lil one!

Precious Pingo, I am sure Phred welcomed you to the Rainbow Bridge with many hugs and much love <3! I am thinking of your mum and dad today with great sympathy.

I'm sure she is running fast and happy! She was very lucky to have you and Stuart as her family. She lived a long and blessed life.