Running in the Klondike International Road Relay!  It's a 10 leg relay from Skagway, Alaska to Whitehorse, Yukon.  Starts on Friday at 7pm in Skagway and runs all night long.  The last teams are into Whitehorse around 3pm Saturday. 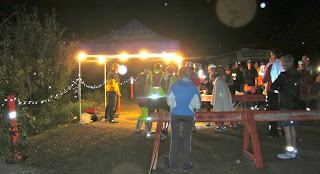 I was running leg 6, the longest leg of the race at just under 26km.  I started running in the pitch black and in a misty rain just before 5am. 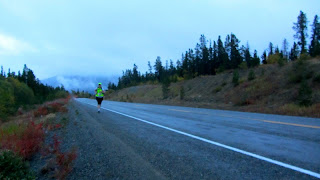 About half way through I was out of the darkness...readers who know me will know that's a big deal.  The dark is one of my least favourite things!  The scenery along the highway is pretty spectacular once you can see it!  Most of my leg was uphill!  19km of elevation gains.  The last 7km were mostly downhill.  Downhill is tough when you are tired! Not as easy as it seems it should be!  I did handle it much better than I did in the half marathon in Mayo though! 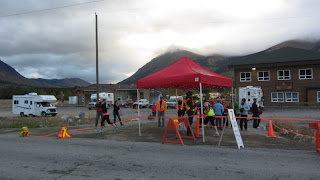 The end of my leg in Carcross, Yukon.  The longest run I've done so far by a few kilometres and I was still upright at the end.  Yay Me!  :)
Next up I'm running a half marathon in Victoria on Thanksgiving Sunday & I've decided to try a full marathon sometime next year....it's a whole new kind of crazy around here!
﻿
Posted by Wandering Spirit Kennels at 9:52 p.m.

Congratulations! We hope you had a fun time with your run. Glad you were able to enjoy your longest run so far. Thanks for sharing. Have a wonderful rest of your day.
World of Animals