Anvik has lived here since the end of August and I swear he's spent more time at the vet than any other dog in the yard! He's at the clinic right now, been there all day and if we're both lucky he might get to come home tomorrow!

Last night, I was getting ready to head with a team for a little mushing by moonlight. 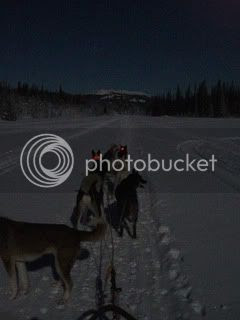 The run went really well, once we got out of the yard. Prior to this fun(pic was taken last night), the dogs had a little scuffle. Waiting to be hooked up + a full moon = brain dead dogs! Anvik, who could not fight his way out of a paper bag, ended up on the bottom of a dogpile. The fight looked pretty minor and didn't last long. We've certainly had much, much worse fights in the past. I got the instigators isolated and checked everyone over. No blood, no obvious wounds, within a few minutes almost everyone was back to their usual little canine selves.

Except Anvik, he was whiny and upset, but I couldn't find anything wrong with him. So I put him in the porch, where he eats and where one of his crates is kept and went for a run. After the run, he ate and drank like he always does. Still couldn't find anything obviously wrong with him, but he squealed in pain when he tried to jump up and give me a hug. He gives the best hugs! So I gave him a dose of Metacam and put him in his big crate beside my bed. I thought he'd just pulled a muscle or was just stiff from the fight.

This morning, he was not terribly interested in getting out of his crate, but when he finally did, he whined and was moving very stiffly. As he drags his little butt out of the crate, I notice a lump on his left side about the size of both of my fists together! It feels like it's full of fluid. So I figure I missed something and he's got the start of a big abcess. Call my boss and tell her I'm going to be late. Take Anvik to the vet clinic. Since he was a drop-off, they just squeezed him in whenever they found time, which turned out to be about two o'clock this afternoon.

It's not an abcess, not an infection, the vet can't find any wounds either. He attempted to do an x-ray, but Anvik freaked out when they moved his legs. That's when they noticed the lump changes size and moves a lot. Because it's a HERNIA! Two inches long and an inch wide!!! That's not fluid in it, that's Annie's intestines sticking out!!! That's a much bigger problem than a missed puncture wound. This requires emergency surgery or it can quickly become life-threatening! Oh, and apparently it's not quite as simple of a procedure as it was when Stuart had his hernia repair. Stuart got to come home in a couple hours!

Thank God Annie likes his crate. The recovery period is extended and will require long stretches in his crate. He is going to be a miserable creature when he figures out that he's getting left behind all the time! I've been told to expect six weeks of recovery before he can pull again! Could be less, could be even more! Wah! 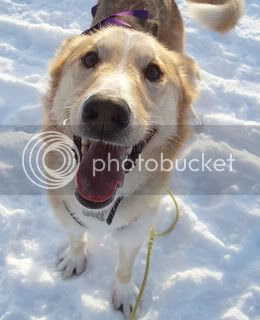 This little happy face likely won't be seen for awhile! 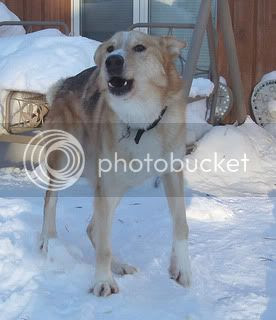 But I expect there will be a whole lot of his patented "Anvik Death Howl" going on! I suppose I should try to enjoy the quiet tonight!
Posted by Wandering Spirit Kennels at 8:25 p.m.

Prayers for Anvik have been said over on Pet Talk; and the Prayer Pups have God "workin" on his case.

We've got everything there is to cross - crossed. We'll hope for a favorable report later tonight or first thing in the morning.

Keep the Faith, Tamara - the Kids have been through worse bumps & lumps. We're ALL hoping for the best for Anvik!!

I hope Anvik's surgery went well! Hopefully he is sleeping tonight and will wake the vet crew up with his Death Howl in the morning letting them know he wants to be back with his mom!

Poor, sweet Anvik! I hope he is enjoying some relief now.
Rachel

I just talked to one of the techs at the clinic; Anvik's vet isn't in yet.

The surgery went well. Not sure how extensive the muscle damage was, but his intestine was not damaged. Have to talk to the vet later for details of the surgery. The extent of the muscle and surrounding tissue damage will determine how long it takes him to recover. Damage to the intestine could have killed him.

Anvik is quiet this morning, so he's definately hurting. He did eat some canned food and took his antibiotics like a good boy. He is really good about taking his pills. They have gauze wrapped around his side. He absolutely refused to have an e-collar put on. I'm kinda glad he did that. After his last surgery, he wouldn't let me put one on him either! At least it wasn't just me! I ordered a bite-not collar for him after the last surgery and he has a collection of jackets to wear when he's outside.

The tech thinks Annie will be able to come home tonight.