Such excitement around here last night. We were out for dinner with friends and got home around 11. No Mac at the gate. Mac is long, leggy and has a wicked vertical. Few fences can stop Mac if he really wants to go, especially in the winter when the snow pack makes things a little lower! With the recent melt, Mac has been staying in the yard and I haven't had to tie him up for a few days. I assumed he had gone over the fence and was visiting his friend, Daisy, who lives not far away and is allowed to roam.

Drove to Daisy's house, no Mac, although Daisy was at her own house for a change! Come home and change into hiking/searching clothes. An hour of falling through crusty snow, still no sign of Mac. So I came home to make up a poster and start putting out "LOST DOG" ads.

Then I went to pet Ozzy, Mac's littermate. Imagine my delight to see Mac playing with his brother! Should have checked that pen first, but who ever heard of a husky who lets himself into a pen! Delight and relief quickly returned to frantic worry. When I turned my flashlight on Ozzy, he was covered in blood! A quick once over revealed that none of it was his own blood. His penmate, Antare, had a few scratches and Sundin was no where in sight. In my ever optimistic way, I immediately assumed that Ozzy and Antare, who are troublemakers sometimes, had seriously injured Sundin. I should probably apologize to them for a few of the things I said while looking for Sundin!

About fifteen minutes later, I found Sundin, still in the pen(it's huge) and completely uninjured. He was wooing and doing his "happy dog" prance. He kept running back and forth between me and the spot he had been laying. While walking over, all I could think was "please don't let it be a cat". I had already made sure all my cats were accounted for, but one neighbor does refuse to keep his cat inside. Surely, she wasn't stupid enough to come through the fence....

Fortunately, she wasn't and the neighbor's cat is alive and well. A young male MINK was not so fortunate! I thought it was a weasel, but my father in law(who has worked on a mink farm) says it's a yearling mink. A quick Google image search seems to confirm this! A freakin' mink; a species described as "small but extremely aggressive". They are supposed to live much closer to water, but it is mating season. Poor little guy was just out looking to get lucky and ended up in a heap of trouble!

Hard to believe such sweet little faces are capable of such mayhem! 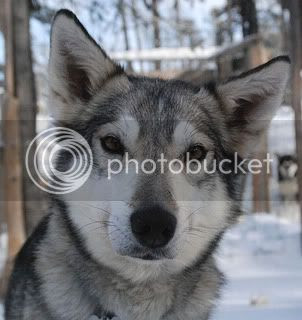 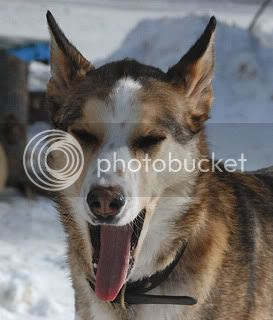 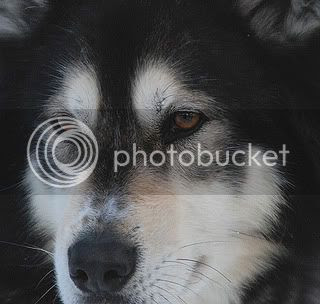 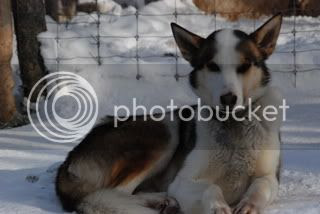 And Ozzy
Posted by Wandering Spirit Kennels at 8:26 p.m.

Antare sort of reminds me of myself. We have the same eyes!

Bummer about the mink. But, you don't really need a coat, so I assume he ticked you off by trespassing into your doggie territory! Whenever we get squirrels and bunnies who trespass on OUR territory, we have to chase them off too. We just haven't been fortunte enough to catch one.

On a positive note, at least Mac didn't get lose!!

At this rate, it's going to take a while to harvest enough dumb Mink to make a hat, let alone a coat!

Glad nobody got lost or hurt in the in the Mink Hunt.

Way to go, Sundin! good job! The aggresive ones really are the most fun to dispatch, aren't they?