Kayleigh got to come home on Thursday night. So far so good! She's sedate, but eating well and enjoying going outside a little bit. She's been great about leaving the incision alone. She's even been getting some collar free time. She's not a fan of the bite-not collar, but she is a fan of the crate! Kayleigh has never been crated before so I was a little worried about that. She loves the giant crate and will put herself in it when she gets tired. She likes her little indoor den! 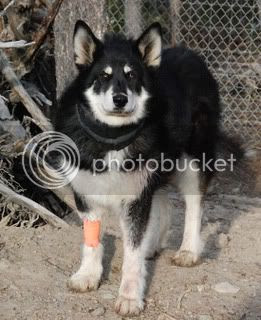 Could be because she digs her own dens outside. As soon as she was allowed out she had to go make sure her digging spot was undisturbed. She's not feeling up to digging yet, but she would have been ticked if some other dog had touched her tunnels!
Posted by Wandering Spirit Kennels at 9:45 a.m.

And mental note to myself: NEVER have toothpicks around!!!

Glad she is doing so well! Keep a close eye, and be sure to give lots of smooches and treats!