In my obsessive little world, before there were dogs, cats and glass, there were the Calgary Stampeders. So I'd really just like to say "I told you so"....to everyone who told me that the Stamps would loose on Sunday; that Anthony Calvillo would get the fairy tale ending to his come back season; that Henry Burris would choke! HA!!! It is a heart warming story and I'm very glad that Anthony's wife is winning her battle with cancer. Mike Labinjo has a heart warming story too and he's a Stamp! Yup a couple years ago, Henry might have had a bit of trouble with the pressure, but that label is gone forever after Sunday! Someday if I ever get to name dogs again, I'm think Nik, Jermaine and Ken-Yon would be awesome sled dog names! 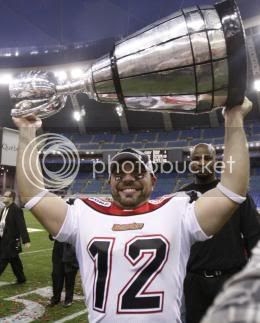 Picture of Sandro DeAngelis hoisting the Cup was stolen from a Calgary radio station website because I wasn't there. I have, however, already asked for November 27-30, 2009 off work so I can be there to watch them defend the title in their home stadium. Yanno, assuming I can find a dogsitter! A year should be enough time to get that organized, maybe!
Posted by Wandering Spirit Kennels at 8:57 p.m.

I know the khool feelings since The Doggy Nanny and Mom's Phillies won The World Series!

Enjoy all the vikhtory brings!

Being able to say :I TOLD ya so!"
is so very good for your well being!

Congratulations on your blog! The DogTime.com team has been reading through hundreds of pet-related blogs and we've selected your blog to be a DogTime Blog Star. We invite you to join the DogTime Blog Network based on the following criteria:

Enthusiasm and love of for pets
Relevant and thorough pet content

Who is DogTime? DogTime Media is the largest online community of animal lovers with nearly 8.2 million unique visitors per month and over 180 member sites which include the best dog, cat, bird, fish, reptile and horse content from across the pet category. Please visit DogTime.com to learn more about our mission.

As a DogTime Blog Star more pet enthusiasts will see and read your blog and provide you with the opportunity to share your love of animals. Once you have joined the DogTime Blog Network there may be an opportunity for you to qualify to make advertising revenue.

Participation is simple, as we will use your existing RSS feed to feature your blog and posts. If you would like to participate, simply reply to this email with the URL of your RSS feed.

We will reply back with your own DogTime Blog Star badge to post on your blog site. For more details about the benefits of participating in the DogTime Blog Network please refer to our FAQs here: http://dogtime.com/dogtime-blog-network-faq.html. If you have additional questions please contact me directly.

Thanks, and we hope you Find Your Wag!