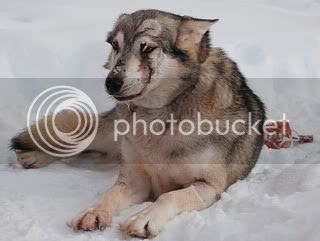 Sundin was on the loosing end of a disagreement with Ozzy two weeks ago. He had surgery to put his face back together two weeks ago tomorrow. The wounds actually looked worse than they really were. Facial wounds bleed like crazy!! But that's still gonna leave a mark! 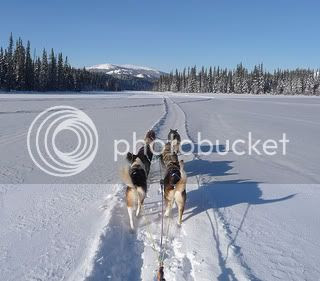 The stitches are out now and he's healing nicely. New scars do not stop Sundin from pulling. That's him in the middle of the team this afternoon.

Being beat up has been a bit of a blessing for Sundin. Sundin is painfully shy and I often have difficulty getting close enough to touch him. He knew that I would get him help when he first got hurt though and let me catch him without any problems. I am glad to know that he trusts me when he has to anyway! He's spent the last two weeks in the house with me...getting medicated, handled, socialized. He could go back in his pen now, but I'm keeping him in the house until I have to go back to work. He's never going to be the type of dog who runs up to strangers, but maybe I can get him to run up to me, when he's not covered in blood!
Posted by Wandering Spirit Kennels at 2:57 p.m.

Way to look at the glass as being half-full!!!

btw - that is the BEST title for a blog post about dogs... LOL

Why do they always pick on the 'timid' ones?

I suppose "The Mark" will add 'character' to Sundin's appearance,
but seems like the hard way stand out in the crowd.

Could he spend some 'shop time' with Dad?

Owww, ow ow ow ow ow!
Ouu, thats gotta hurt! He's furry fortunate to have a full-time nurse like woo. And that he didn't lose an eye or something. Sending healing sibe vibes to Sundin!

I am purring that Sundin is all better soon, and that he lets you catch him whenever you want!

Oh, Sundin, I'm sorry you got hurt. Please run up to your mom some time (many times) so she can give you petting and hugs for all of us.