Six years ago this afternoon, I dragged a terrified, kicking, panicked Chase out of the shelter where he'd lived for 18 months. He'd come in as a four month old puppy, all legs, too far past the cute stage to get adopted quickly, too full of fear to get someone to notice him in a positive way. All his buddies already lived at our place, so why not Chase too? Except Chase didn't want to leave the only home he'd ever known. It took three of us to get him into the truck. 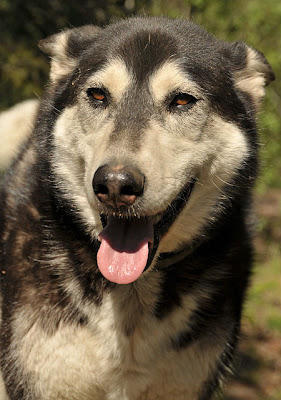 It would probably take three people to get him back into the truck now. Chase likes to run and go for walks, but he is happiest in his yard; in his pen with his beloved Goldie. Chase does not like change. He likes everything exactly the same as it was yesterday!
Chase is not the brightest crayon in the box. We have often said he's so dumb it's a bit suprising he remembers to breath on his own. He's a giant over-grown puppy, stuck in goofy puppy mode forever. But he just wouldn't be Chase if he was a doggy genius. It's part of his charm!

Sometimes the dumb ones are gift....Chase is an easy dog in every way; Chase never thinks to challenge me; I tell him to do something, he does it; there's no husky selective hearing, no debate on what it's in it for him; he just does as he's asked to do; he's grateful for every little tidbit of attention and love he gets; every walk is the greatest adventure he's ever been on; every dinner is the best meal he's ever had; he can't open gates, never tries to escape or challenges a fence and even if he did mange to, he'd never dream of leaving the yard, its scary out there; he never gets put out because another dog got something he didn't; he doesn't seem to realize he doesn't have to let Goldie be the boss of him; he's quite happy to let her boss him around endlessly and she's delighted to be the boss of someone. 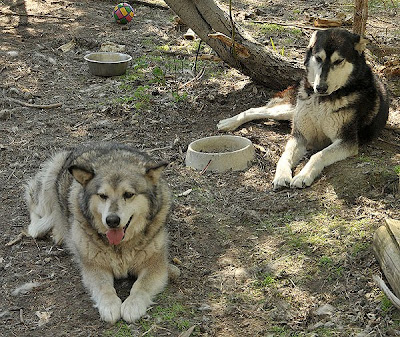 Anyone who thinks dogs don't form their own love bonds needs to meet Chase and Goldie. He is her only canine friend; she's half his size, 5 years older, short, slow and fat to his long, fast and lean. Goldie's life has been much happier since Chase came into it. As she nears the end of her life, he continues to dote on her. I am hopeful that his clueless nature will help limit his grief when she passes.
Chase is my big ball of dumb, but I say that with great affection as he's also a great snuggler; a sweet and gentle boy; an entertaining goofball; a gift to me and Goldie.
Happy Gotcha Day, my doofus dog.
Posted by Wandering Spirit Kennels at 10:19 p.m.

Thank goodness for these goofballs eh?!?!