Not retired after all!!

After Paxil's surgery to remove the mast cell tumor from her leg, I had decided that she was retired. Paxil had other plans. Although she enjoys her time by the woodstove and being a house dog, she is not ready to give up the harness yet.

Last week, my parents were visiting and I took my Dad for a sled tour. I had no intention of taking Paxil. Her stitches were barely out! I let her outside while I was hooking up so she could get some fresh air, but had fully planned to leave her at home. She's a smart little thing and she was having none of that! She waited until I was harnessing my most timid male, Antare. She rushed over and head bunted Antare out of the way and tried to put her head in the harness. She would not leave and continually kept getting in the way.

I can take a hint so I put her harness on her. She waited at the gate very patiently until it was her turn to be hooked up. No way was she going anywhere in that team but up front. She dragged me right to the leader line and started woooing and jumping around like a yearling!

I explained to my Dad that when Paxil got tired, as I expected she quickly would, he would have company in the sled basket. Paxil could come, but she could ride home when she'd had enough. 15 km later, we came back in the yard with Paxil still out front, tug line still tight, tail up and ready to go again!

She's gone twice since then. The last time was on Friday night when the only time she even slowed down was to bark at a person with an off-leash dog. She blew right by the dog with no problems, but slowed down to tell the owner off! I am quite sure she told him to keep his dog on a leash and out of her way!

I talked to my vet about letting her run and he said that if she feels up to it, let her go, just watch for the same signs of distress I always look for in my dogs.

In the picture Paxil is the black and white dog up front in the red harness, yelling at us to hurry up!! 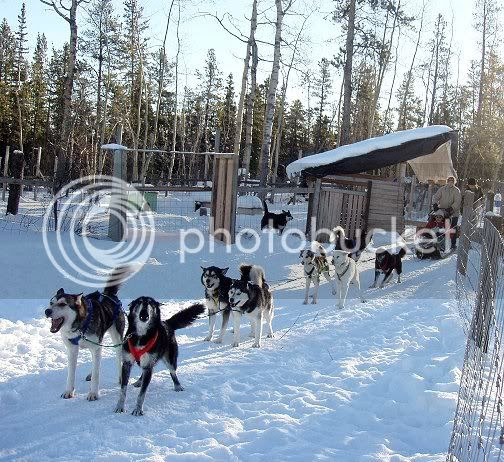 Her relisancy and determined spirit amaze me.
Posted by Wandering Spirit Kennels at 6:54 p.m.