Not renal failure anyway. Beau's blood test results indicate his kidneys are doing ok...not great, but as well as an ancient cat's kidneys can be expected to work. But his liver is in rough shape. It's not working well at all! The only thing that makes that somewhat better than renal failure is that the liver does have some ability to heal itself. The vet who's been treating him(Did I mention she looks like she just graduated from high school last week???) says there are several possible causes of liver failure in cats. The most obvious in Beau's case is exposure to toxin. Who knows what he got in to or ate while he was a stray! The other options are hepatitis, cancer, tumors....all sorts of lovely things! All of them require a biopsy and possible surgery to determine. I have decided not to put Beau through anything invasive. 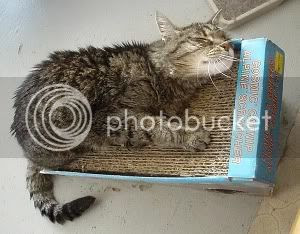 Look at that little face! He's content, happy, not in any pain, not suffering...oh and he's stoned on catnip! For now I'm just going to manage his symptoms and as long as he stays like he is in that picture, he won't be going back to the vet. I can do sub-q fluids at home as he needs them. I've already got milk thistle on hand. It's supposed to help the liver clear toxins. He's supposed to stay on a low protein kibble, but he's not thrilled with it, so I'll offer him canned food a few times a day. If he doesn't want the canned prescription stuff, he can have the Fancy Feast Ocean Whitefish and Tuna that he loves so much! As long as he eats! 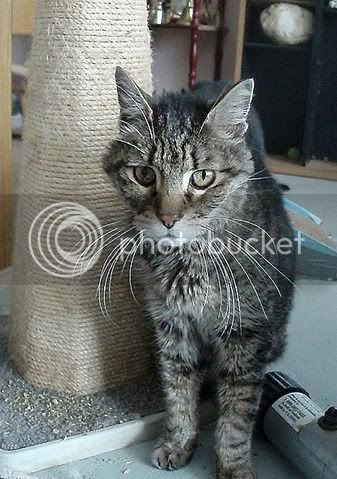 The vet had no prognosis or time lines for him. He could have days, weeks, months....maybe even longer. I'm aiming for longer!
Posted by Wandering Spirit Kennels at 10:42 p.m.

Glad you decided to go the gentle route with Beau. Love him while he is here and then let him cross the bridge. Remember as your mother that is the way I want it to be at my end!!! We are home again, tired but had a good time. Mom

Hi!
I'm Raisa, the Husky Bloggers Ring owner. I am writing to tell you that I made a little change in the Ring HTML code in order to be able to feature a Ring member's pic each month. Go to my blog to learn more.
Licks!
Raisa
[http://diariodeumahusky.blogspot.com/]