So, he wanders the streets for God only knows how long, alone and probably wondering where his family went--he obviously had one before he got here! 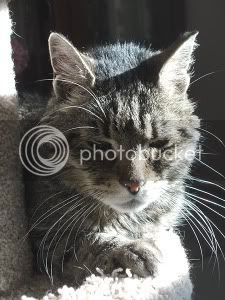 Finally finds his way to a nice, comfy home to spend his golden years in and what happens six weeks later:

I won't have his actual blood test results until Monday, but the vet says Beau's kidneys are very small; he's dehydrated and generally not doing very well. He also has a broken tooth that may be affecting his ability to eat.

He got some sub-q fluids today and I bought every brand of renal support canned food I could find at the clinic. Once the test results are in, Beau may have to spend a couple days on an IV at the clinic. Then he'll get sub-q fluids at home on a regular basis.

I knew when I brought him home that I wouldn't get years with him. Adopting a senior comes with different expectations than adopting a kitten, but I was expecting longer than a couple months. I'm not giving up on him without a fight! As long as he's comfortable and happy--he's purring on my lap as I type this--then I'll do whatever I can to keep him that way! 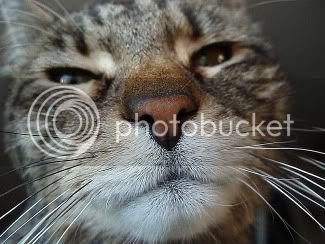 He is going to be sticking his nose in everything for a while yet, if I have anything to say about it!
Posted by Wandering Spirit Kennels at 11:33 p.m.

awww... what a sweet lil kittie face! You go Beau!!

That is such a beautiful cat, and he looks so content. It is wonderful that he has found such a caring owner. How does he like all the other cats?

Heya Beau! You make sure to give your mommy head butts whenever she stops paying attention to you. If that doesn't work, lay the guilt trip on hard with some nose lickins and a pitiful mew.

Sending purrs and prayers for Beau, what a sweet face.