And that's the season...

There's still snow around, but we took our last run on Tuesday morning. 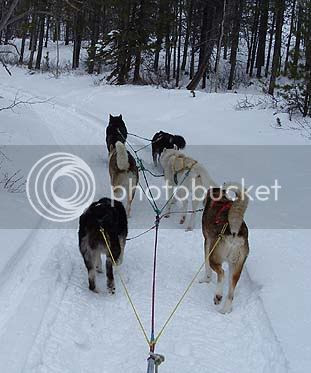 Pingo, Paxil, Pacer, Ozzy, Franklin and Mac came along for the run. They did really well. It's always a good thing to end the season on a good run!

A little tribute to my leader girls. I have other dogs who can and do run up front, but these two are my best leaders, my go-to dogs when I know things could get ugly! 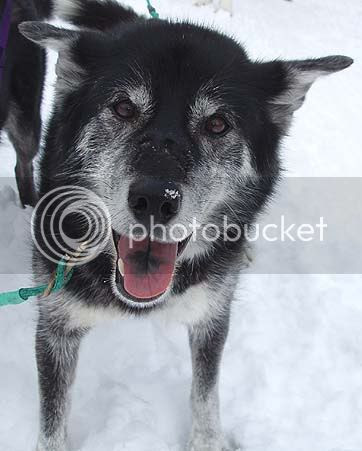 This may well have been Paxil's last run. She'll be 10 next month; she's fought cancer twice and the type she has is highly likely to reoccur. She's still full of energy and attitude, but who knows what her health will be like come November. They don't make lead dogs any better than Paxil. She was trained by my Sleet, who in her prime was almost flawless! Paxil never misses; she knows what I want even before I tell her; she keeps her team in line and doesn't tolerate any nonsense; she is focused and driven on the trail; nothing distracts her, not loose dogs, not other teams, nothing. I hope she's around and able to work for a while longer. I don't know what I'm going to do without her up front when that times comes! 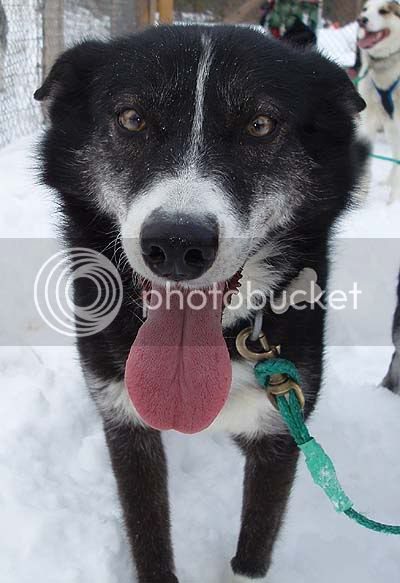 And my goofy little Pingo. She's almost 9 and as silly as they come, until she's in her harness. At that point, she's a little pulling machine. Her gait is all messed up; her conformation is terrible, but she gets the job done and she does it with great enthusiasm! She's really come into her own over the last couple season. She's gone from strictly a trail leader to a reliable command leader who is helping train the younger dogs to take her job someday! Her greatest gift remains her trail sense though...she knows the best way through overflow, which trail is packed best and always knows the way home! She can even turn an 8 dog team around without a tangle when she has to or when she decides that this run just can't get any better and it's time to go home. Somedays the dogs are smarter than their musher!

Thanks for your help this year girls. Thanks to all the dogs who trotted along behind you as well--Pacer, Mac, Ozzy, Deuce, Raven, Franklin, Sundin, Hobo, Antare, Chase, Founder, Chum, and Earle. I hope you guys had as much fun as I did! Enjoy your summer off!
Posted by Wandering Spirit Kennels at 8:33 p.m.

Pingo's face looks so much like my Comet. And they're the same age! Comet will be 9 next month. I just posted a picture of her on my blog.

Good job Paxil and Pingo, mom better give you guys extra yummy chummies or something with butter on it.

hey Tamara, what's there to do in the spring/summer? What can you do to keep them dawgs from gettin' fat?

We hike alot in the summer. I have a springer attachment on my bike for the ones who are completely untrustworthy off-leash. There are usually lots of days when it's cool enough to hook a team to the ATV for a quick run. I also change their kibble to a slightly lower calorie version of the same brand.

I have a sea kayak I spend a great deal of time in during the warmer months.

There's lots of things to do up here in the summer months too--and lots of time to do them! That midnight sun is a good thing!