Not exactly a happy anniversary but this week marks four years since we loaded Pete onto an Air Canada flight and sent him off to Saskatoon, so sick we weren't entirely sure he'd survive the flight, let alone the surgery he needed. But he survive he did. After 2 weeks at the Western College of Vet. Medicine clinic, Pete was on his way home. Maybe we should have changed his name to Petunia at that point. The surgery performed was essentially a kitty sex change. Pete has major urinary tract problems and got completely blocked so often that his little feline life was in grave danger.

Four years later, he still has urinary tract problems, but they are no longer life threatening and the episodes get further apart. He's currently finishing up a course of Baytril for an infection. He's fun to pill! I have several new scars on my hands now! 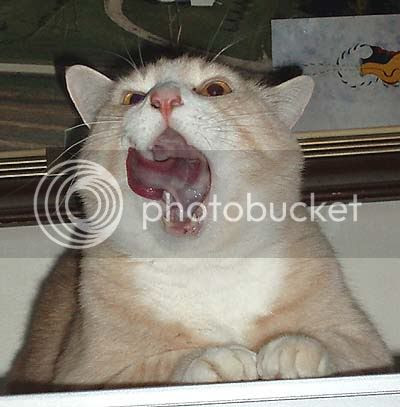 He is feeling better though! He needs to live to at least 20 years old. I should have his vet bills paid off by then!
Posted by Wandering Spirit Kennels at 11:09 a.m.

looks like he's saying "Back off wit' da pills, lady!"