Five years ago today, Miss Kayleigh, joined the pack. It was a much smaller pack at the time. Kayleigh was dog #5! What an adventure life with Kayleigh has been. I will admit that I put no thought into adopting her. I just felt a connection to her and knew that she was coming home with me. Probably a good thing for her--if the shelter had got to know her better, she might not have made it out alive. To say that Kayleigh had issues is an understatement. She came with serious aggression issues, resource guarding, an out of control prey drive and a hatred of all other dogs. Fortunately, with a great deal of time, patience and effort, Kayleigh has over come many of her issues. She hasn't attempted to take anyone's hand off for a very long time! The dog aggression and the prey drive are just bred right into her and will never be altered. So Kayleigh has her own pen, free from other dogs and where she never even sees a cat. If the odd suicidal squirrel goes in there, well, that's not my problem! She has access to the heated shop whenever she wants and enjoys spending her nights in front of the woodstove. It's been a bumpy ride, but not without it's joys and laughter. The tough ones are often the best teachers!

Kayleigh was a busy girl today: 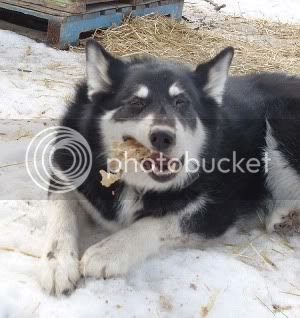 First she crunched up a pig's ear--that took about thirty seconds!
Then we played some fetch. She got a new rope/tennis ball toy. She's the only one of all the dogs who will play fetch with me. The rest of them look at me like I might have grown a second head when I throw the ball! Earle will run up and sit beside it like "here's your toy, Mom, why did you throw it away?"

Then Kayleigh practiced the fine art of digging! The ground is starting to thaw and the dogs are digging fools again! Kayleigh takes digging to a whole new level. She is exceptional at it! 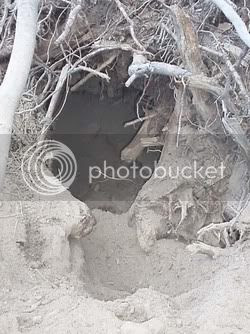 This beauty is big enough that all 108 pounds of Kayleigh can fit in, turn around, take a nap and come back out without bonking her head! Anyone need some trenching done?