Back to some dog stuff...

One last bit of water news....the witcher dude came over tonight and gave us all our money back! He said he always knew he would miss someday, but hoped it would be with some rich people he didn't like! He found out yesterday how far off his depth estimate was and said he felt so bad he couldn't sleep last night.

And we now return to our regular scheduled postings.....Dog stuff! See the March postings if you missed this originally, but regular readers will remember when I was a witness to a drunk idiot dragging her dog behind her car or as she put it "taking him for a walk"....Well, because I am a little nosy sometimes and because dogs make me forget that I'm a little shy, I continued to stick my nose into the situation: 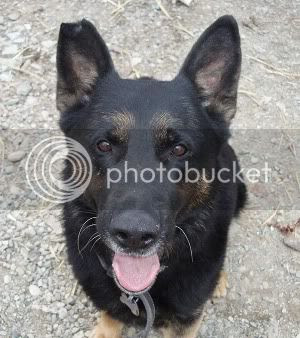 Introducing Nytron.....NO, he doesn't live here! He's a purebred GSD, not fond of most other dogs and not cat friendly. He is however a perfect pet for someone who's home alot, has no other pets and has lots of experience with german shepherds. Someone like my father-in-law who is now Nytron's proud owner. Course he's out of town for a bit so I am dog sitting! 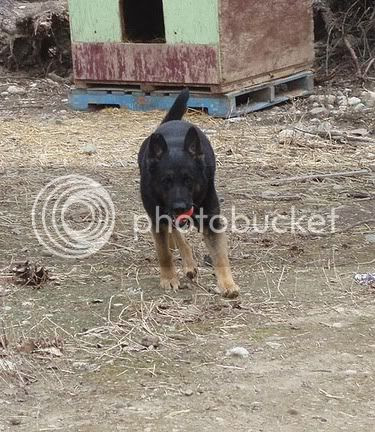 This has been my entertainment for the last few nights. I throw the ball, Nytron brings it back--over and over and over and over. Only that little orange ball. He completely ignores other toys. He is obsessed with that ball. As a husky owner, I find this a bit fascinating. My dogs do not fetch. Pingo will go get a ball if I throw one, but she won't bring it back. She takes them to her dog house and adds them to her stash of treasures. She has a wide array of treasures--stuff she found in the recycling, in the compost pile, toys, bones, beer cans...she's a nut! No one else will even pretend to be interested in playing fetch.

Nytron has one other interesting trait. When I give him a command, he does it--the first time! It's amazing. None of that "yeah, I heard you, I'll do it later" stuff I get from my own dogs. Although their independant natures are one of the things I love most about huskies, I can see how that immediate response thing could be appealing!
Posted by Wandering Spirit Kennels at 8:30 p.m.

Aww, Nytron looks like a beauty. Glad he's finally in a good home.

I know what you mean about the immediate response thing. My Yoshi is kinda like that as long as I'm not asking him to fetch, down, heel, hike... ok maybe he's not quite like that. At least he doesn't gimme any backchat. He does do sit though and pretty reliably at that.