Friday, May 26, will mark one year since my Dominique died. That awful year of firsts--the first of everything without her is over. For the past few days, the tears have flowed almost as freely as they did in the days and weeks immediately following her death. Finding her little broken body will forever be one of the worst moments of my life. A year later, I still can't find the words to express my horror when I realized that it was her laying in the yard. Dominique was an indoor only cat who escaped unseen and was killed by my own dogs. 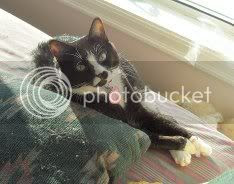 The dogs were merely acting on their instincts. They'd never seen an outdoor cat before that evening and have never caused any trouble with the cats in the house. Oh, I was angry at them for a long time. For awhile, all I could do was feed and water the dogs. I said some vicious, awful things to them. I wanted nothing to do with them. As the fog cleared, I realized that not only had I lost my feline friend, but I was loosing my canine companions too. They had no idea why Mom was being so cold to them. They had long since forgotten the event. They had forgotten before I even got home that night and I believe that if they had known they were about to break my heart, they would have not hurt Dom. I'm grateful that I don't know which dog or dogs were involved. I am not sure how I could have forgiven if I had known exactly who did it. In any case, the ultimate responsiblity for her death is mine.

I try not to remember the way I found her, but to recall her in happier ways. The last time I saw her alive, she was safely in the kitty enclosure, happily hunting bugs. I clearly remember stopping to watch her pounce and jump in the grass. I treasure that image of a happy, carefree cat. I remember the way she always let out a little mew before a pet and would head bonk my hand; the way she loved to snuggle under the covers with me and how every night there was a race between Dom & Ivy to see who got the best spot in the bed; the little jingle of her tags as she raced through the house; how she always waited behind the door for me after work; the silky feel of her tiny white paws; her giant, loud purr. 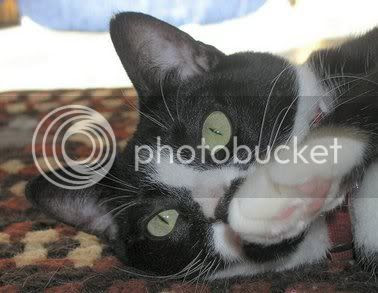 I remember that tiny kitten, just a five weeks old, stuffed inside my winter jacket for the ride home. She had been found wandering around a busy street and brought to my office. Even then, just a wee thing, she was confident, bold and curious--traits that defined her for the rest of her all too short life. When I introduced her to the two adult male cats who already lived here, she took one look, bopped them both on the nose, despite the fact that she was the size of their heads and that was that. Dominique the Dominator was home and ruler of the house. Full grown she weighed a mere five pounds, but she believed she was a lion!

Perhaps her life would have been longer if she had been afraid just a little bit every now and then, but she would not have been my Dominique that way. If something new was in the house, if something got knocked over at 3am, if the dogs' water bucket was tipped over, Dominique did it! She was into everything. The water bucket was her favorite thing to play in. She tipped it every day. We learned quickly not to leave any water in the bottom. Occasionally since her death that bucket has fallen over for no apparent reason. I like to think she was stopping by for a visit. 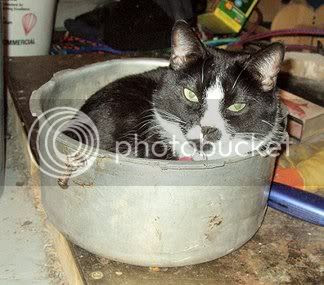 10 days after she died, Dominique sent us another kitty, another tuxie with a confident, goofy personality: 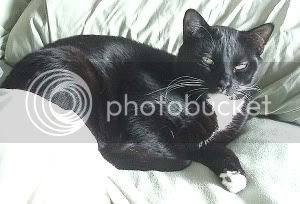 Sweet Boots. I believe she not only sent him, but that at times her spirit visits through him. They are so very much alike. Now when something goes crash in the night, it is always Boots who is at the centre of the commotion. The other cats accepted him immediately, as if they already knew him--maybe they did. Last night as I lay crying in bed, Boots came and curled up in the same spot Dominique used to sleep in, gave me a few head bonks and licked my hands, just like she used to. 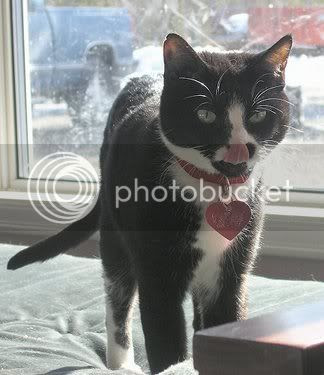 I miss you, my little troublemaker. What I would give to pick you up just one more time and ask "Dom what have you done now??". Try not to cause too much ruckus at the Bridge. Say hi to Hoodoo and Twicket for me. A part of my heart resides with all of you wherever you are. I love you, my precious Dominique.
Posted by Wandering Spirit Kennels at 11:02 p.m.

Aw, crap! You got me weeping like a baby!! What a touching tribute, it felt at times like I could have written many of those words about my sweet Jasper-the-cabin-cat. You know that whole story... I feel your pain. It sucks...

I did laugh about Dominique "bopping" the others on the head when she arrived! Too funny.

My cat is fearless, too, and it means that I worry anytime he's outside. He'll chase wandering dogs out of our yard, because he thinks he's as big as they are. And I'd also cry like a baby if I lost him.

Awww, she sounded like a very purry and sweet furry friend. Glad to hear that Boots is so friendly too.

Oh Tamara, I am SO SORRY to read about your misfortune. I have my own big kennel of sleddogs and I would just not have any other pet animals around, because the risks are too great. As it is, we try to be super-secure and highly vigilant with our puppies, because there are probably several dogs in the kennel that would kill a small pup before they had time to realise what it was. Death on small critters of any sort.

This used to surprise me, because it seems superficially illogical that sleddogs would have such high hunting instincts. As our dogs are all Siberian stock, some very close to their origins at that, I've had to conclude that this must be part of survival over there; probably the dogs were usually turned loose in summer and expected to shift for themselves. I KNOW that all these guys get very excited by squirrels, rabbits and grouse, and if you are cooking MOOSE meat the odour just drives them wild!

NICE blog! Glad you happened to mention it.