A couple weeks back, Anvik developed what we thought was an abscess on his right side. Antibiotics did shrink it, but didn't get rid of it. So Anvik went back to the vet yesterday and the desicion was made to take the lump out. (Anvik would like to note that he had no input into this decision, despite his many attempts to get his point across). Today Anvik had surgery--dogs get quick health care!

The lump is some kind of granuloma, which could mean he had a foreign object that his body tried to encase, like a bit of porcupine quill. He hasn't been into anything like that since he got here, but who knows what he got up to in his former life! It could also be "some kind of mass". Isn't that definitive? The vet saved a piece of it that could be sent out for a biopsy. Regardless of what it actually is, the treatment would likely be the same--cut it out! Dr. Kim was very aggressive in his removal and took wide margins. Hopefully it won't regrow and Annikins will be fine!

Anvik has a big wound that I imagine he will play up for all it's worth for as long as he can! He did treat the clinic staff to the "Anvik Death Howl" all day long, except for the brief time he was knocked out! By his behavior tonight, it's hard to tell he had surgery at all. He very hungry and very noisy. I have been throughly told off for leaving him at the clinic all day! 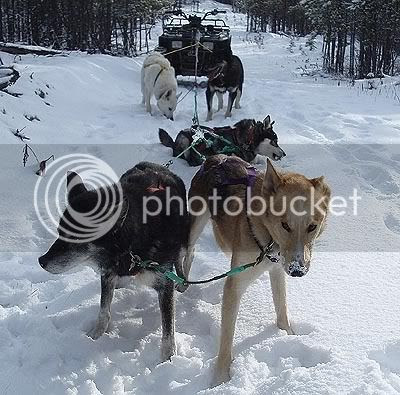 He'll be telling me off again soon when he's not allowed to come for a run. This was taken yesterday. He's doing alright in lead. Paxil is a good teacher. It's snowing like crazy again tonight. Anvik is not going to be happy with being left behind. His harness would rub on the surgical site so he's not supposed to run til the stitches come out in a couple weeks! He should be completely insane by then--or I will be!

And who did I run into at the clinic tonight? dogsled_stacie We have all paws crossed for Ripper's quick and complete recovery!
Posted by Wandering Spirit Kennels at 7:50 p.m.

Glad the Sir Jury was pulled off without complications ... too bad the outcome wasn't more positive.
Hopefully it will result in a Permanent FIX!

Here's hoping for an Insanity Free Recovery for both the FurKid and his Mom!

And hey - have you Paid him Off yet? Hate to have the Shelter come out and Repo him!

hi Tamara..can't get thru on stacie's blog for some reason...regarding Ripper. Be sure to tell her the sad story of PW, the dog that thought golf balls would digest...NOT. That was an expensive piece of surgery. Hope Anvik will soon forgive you for sending her away for even a few hours. MOM

Poor Anvik! Way to give them the howl at the vet buddy, done in true husky form, we're sure! You dogs are soooo lucky, all that snow, we've not experienced snow yet as we were born this spring but we just can't wait! At least it's getting colder here which makes our fluff even fluffier! Thanks for the warning on the escaping too by the way. We've given that a rest for awhile (ok, so they made the fence unmoveable).
We're praying for a speedy recovery & positive outcome on Anvik's biopsy! Face Licks, M&M