Anvik is recovering well from his surgery. He is completely unaware that he is supposed to be quiet and calm. He's not good at that. The e-collar freaked him out to no end. That was not happening! He wears a doggy jacket when I can't supervise him. He's blown one stitch, but that might be a good thing. 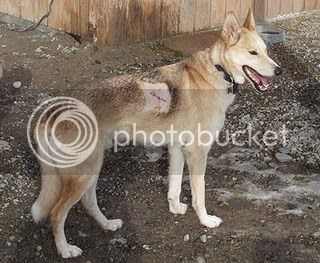 He was back to the vet on Monday with a collection of fluid under the incision. He potentially needed more surgery to put in a drain. The blown stitch has taken care of that! All the fluid leaked out on it's own. He is on antibiotics for another week.

Chum is also doing very well. My annoying, loud, little nutball is back in fine form! 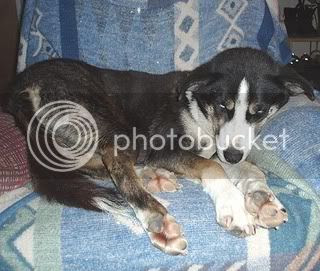 Hard to tell from this picture, but he's really much more energetic. Maybe a little too much so sometimes. Tonight he managed to instigate a fight! Stuart often says Chum is alive because he's fast and Heyoka can't catch him. Chum got Heyoka wound up, Heyoka went running by Bandit, Bandit thought Heyoka was after his stuff, Bandit lunged, Heyoka responded with teeth, Pingo jumped in just for fun(highly unusual for her). End result, two punctures on Bandit, one on Heyoka both in the exact same spot, right by their eyes. It looks much worse than it really is though. They are both spending the night inside, Ban in the house, Heyoka in the shop. Hopefully by the morning, they will have forgotten all about it, although they will be segregated from each other for awhile, at least when no one is home.
Posted by Wandering Spirit Kennels at 10:09 p.m.