Anvik was at the vet yesterday, has another app't next Wednesday.

Chum was supposed to go back to the vet today and get his bloodwork and ECG redone. It's been a month since he collapsed and was diagnosed with severe hypothyroidism. Chum is, as Stuart puts it, "as annoying as he's ever been."(said with great affection of course). The treatment is working, but Chum can't work until I know his heart is ok.

I had to switch dogs this afternoon. Last night Earle came inside at 6:30, got on the futon and didn't move again until 7:30am when I had to coax him to the door. He didn't eat, wouldn't even lift his head to sniff his food. If you'd ever seen Earle, you'd know he doesn't miss many meals. He's hypothyroid too and on a diet to get some extra pounds off him. He's a big boy to start with, well over the Siberian breed standard.

Earle is my most laid back dog. He's a pure joy to have around. I can take him anywhere; he can meet anyone; he's never met another dog he didn't like; he never fights; for a Husky his off-leash recall is nothing short of miraculous. Earle is always the first dog a newbie meets. He's been to schools and daycares as a demo dog. He was my very first dog(as an adult), one of only two in the yard that I have owned since puppyhood. (he's 7 now) He is laid back, but not lethargic.

Not eating and not moving much freaked me out a bit, but he wasn't vomitting. He didn't yelp when I moved his legs, didn't act like he had bloat. This afternoon, I came home to pick up Chum and had to search the yard to find Earle. He was tucked away in a doghouse. I decided that he needed the vet more than Chum. I called the clinic and told them that I was probably being neurotic, but they needed to get a different file ready for Dr. Candace.

Earle is well known at the clinic. He's a favorite among the techs, but even they commented that he was taking laid back a little too far today.

After some x-rays(to rule out a blockage) and bloodwork, Earle has been diagnosed with a massive case of pancreatitis. My vet said his lipase levels should have been at about 800 since he hadn't eaten. 1500 would be considered normal. Her machine measures to 6000. It couldn't measure Earle's lipase levels--he is well above 6000!

He will be spending some time at the clinic, likely a week or so. He's on IV fluids, antibiotics and a painkiller. He can't have any food or anything orally administered until his pancreas calms down. The prognosis for pancreatitis is fair most of the time. My vet made a point of warning me that "he could be in some trouble" with his enzeymes so elevated. I am choosing to believe that she's covering her own butt and preparing me for a worst case scenerio only.

I went to visit him before I came home. He looks pathetic. His eyes have lost their little sparkle. The only time he moved was to lift his head and watch me leave--took me three tries to get to the door! There is a tech who lives above the clinic and will check on Earle through the night. I have complete faith in my vet and her staff and know that Earle will get the very best care there, but I want him home. Even with 23 dogs here, it's a little empty without my special boy. 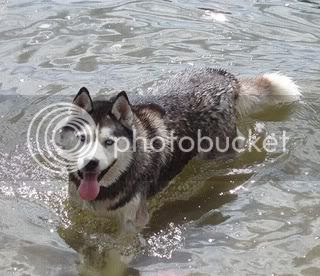 I want this guy back--happy, playing, smiling Earle. Ok, I'd like the water he's standing in to be frozen into ice I can run the dog team across covered with a nice layer of snow, but I'll take just a happy, healthy Earle!
Posted by Wandering Spirit Kennels at 8:52 p.m.

Oh man!! Poor Earle. But good on you for picking up on it. I totally feel like I'm paranoid all the time too, esp. when the vet told me at first he thought Ripper just had a "sore tummy!" I was like, "grrrreat, I brought my tough sled dog in for an upset TUMMY!!"

When it rains it really pours eh? I had like, no vet bills for a long time, then the shit hit the fan! Ah, but it just comes with the territory.

I'll be thinking about that big beauty of yours - let us know how he's doing. I know that empty feeling too when one dog is away at the vets. It doesn't matter how many are in the yard, the whole *vibe* of the yard is thrown off with just one furry buddy missing. Here's to a speedy recovery for Earle!

You have my deepest sympathies both for Earle and for the vet bills. I have been extremely lucky not to have more than two emergencies in the last two years. Having healthy dogs does leave more money for food and optional stuff like spay/neuters.

This is the third Siberian I have heard of with pancreatitus in the last week or two. I will keep my fingers crossed for Earle.

How is he doing now Tamara?