Things to never say out loud..."They'll be fine", "That'll never happen" and "Heyoka's been really good lately". The last one I said on Saturday when Stuart got home. Sunday afternoon, Heyoka beat the crap out of Anvik! It's always Anvik who looses these battles, mainly because he coudn't fight his way out of a wet paper bag. He just doesn't have it in him. It was a short, quick fight since we were both home to break it up in a hurry. Anvik still spent yesterday at the vet getting the holes closed back up.

Anvik won't wear an e-collar. He freaks right out and actually injures himself. Somewhere in his past, he must have had a bad experience with one of those things. He has figured out the bite-not collar and won't keep it on either. Right now, he's wearing a t-shirt with a kitten on it! He looks silly, but the stitches and drains are staying in place and he's not freaking out about it! 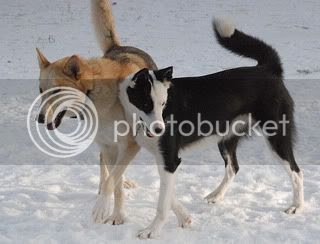 It will be awhile before Tehya is allowed to play with him again!
Posted by Wandering Spirit Kennels at 11:12 a.m.

I had to rush my cat to the vet this morning with a urinary blockage. I don't know how you handle the very regular stress of having to rush various dogs to the vet for various reasons. Hope Anvik feels better soon.
Shannon

"Sunday afternoon, Heyoka beat the crap out of Anvik! It's always Anvik who looses these battles, mainly because he coudn't fight his way out of a wet paper bag. He just doesn't have it in him."

Prayers that poor Anvik heals up OK - poor guy probably has scars on the scars, now.

I recently said that one particular dog was my favorite for the day, she immediately became started barking at the wind, jumped on the counter, ate a stuffed toy, got stuck under the entertainment center twice and peed on my pants. I have learned my lesson.
Paige

Oh man, not Anvik again! that poor guy, like Phred said, he's gonna have scars on his scars!

I know what you mean - last week I said "Look how well our two are finally getting along"....and the next morning got up & Jack had put 3 punctures in Star's foot and she left teeth marks down his nose/muzzle. Fortunately they are healing ok. *shakes head*

Poor Anvik, he has been through so much lately! I think he needs a nice cooshy room in the house where he can be alone and pampered for the next 4 or 5 month's!