Well, snow was falling today while we were out on the trails, but there was barely enough for Antare and Pingo to lick up. Have I mentioned they are both dippers? Oh, they tried to dip today, but only got dirty noses for their efforts. It's a habit I should probably try to break, but I don't really care that much. They can grab snow if they want to. Hopefully, there will actually be enough for them to get a real mouthful soon! 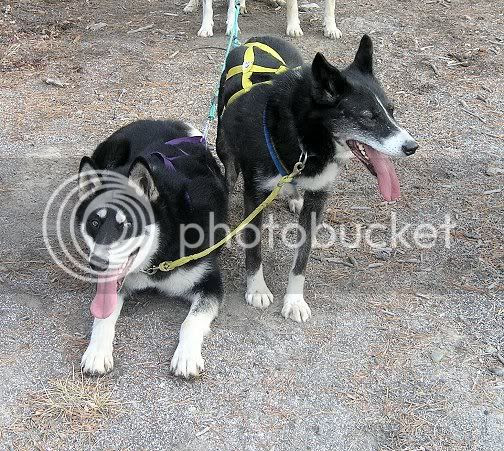 Pingo and Raven taking a break today at the spot we turned around. Raven is laying down. She's no fool, she takes a break whenever she can. Plus Pingo and I were having a little discussion about what the word "GEE" means. That's why she wouldn't look at me. She knew she was ticking me off! Took three tries to get her to gee today. She wanted to keep going straight, along the trail she runs most often. I wanted to turn right and go home. I won eventually, but Pingo was quite clear that she disagreed with my training plan! About the only thing I really like about training on the ATV is that parking brake! Means I can correct issues without worrying about my team running off without me--not that my lovely crew would ever do that!!!!! 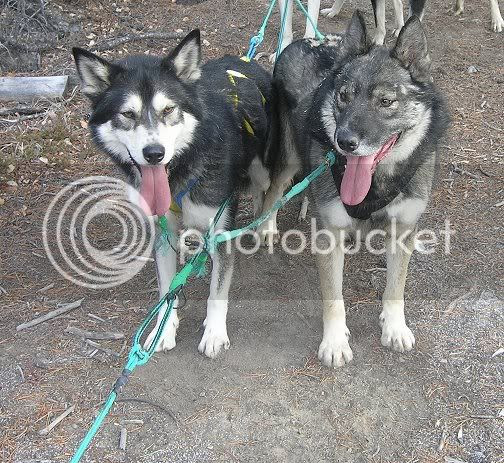 Deuce came along today too. First time he's run beside another dog. He was great. Antare can be a little jerk sometimes. He thinks he's very tough, until another dog actually challenges him. At that point he's a little wimp again! Apparently, he knows that Deuce could kick his butt and was wise enough to just shut up and pull!

Today was Ozzy's first run in a long while. Last time I tried to put him in the team, he blew a gasket, slipped his harness, broke his collar and vanished into the forest! Apparently he didn't want to run that day! He did follow the team though and came back into the yard without any further commotion. Today he waited by the picket line to be hooked up (God bless the person who invented those things!) He ran very nicely in wheel beside Franklin, who never misses a stride. 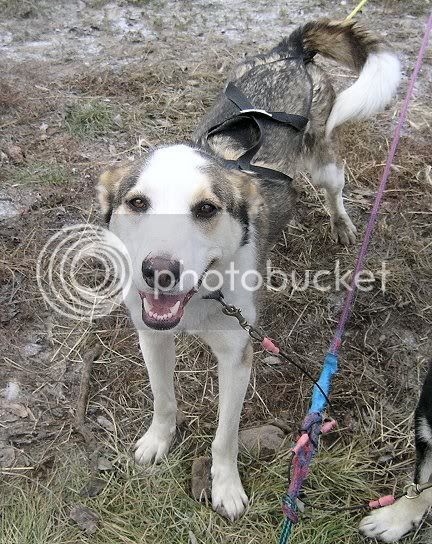 This was taken after 12 km. Happy little Ozzy looking like he could run another 100km. He's the sweetest little guy. I love his happy, optimistic nature. Hard to remember that he used to be afraid of his own shadow and was pretty sure that all humans were pure evil!
Posted by Wandering Spirit Kennels at 8:54 p.m.

That's promising for me and my Loki, knowing that Ozzy was sort of freakish too a while back. I'll pass it on to Loki...

Hey Stacie! Ozzy was beyond freaky when he first got here. He barked incessantly at anything and anyone who got to close to him. he still does that with strangers. We couldn't touch him at all for the longest time. Not so much of an issue anymore. Now I have trouble walking around the yard without tripping over him!

Loki will come around too, I'm sure!