This afternoon, I had the bright idea to try hauling the sled out again. We had a skiff of snow this week. Must be enough by now to park the quad. Bad, bad, bad idea. In a moment of sanity, I did decide to only take a four dog team. That may be the only reason I am not out looking for a run away team right now! Four dogs at least gives the illusion that you have some control!

Things went wrong right from the start. The area where I start from is also where Deuce eats and sleeps so there is a doghouse in there. It's off to the side, out of the way, never had a problem getting passed it today. Ran right into the damn thing today. Made a flying leap and grabbed the sled, rode on the drag mat on my knees for a couple hundred yards. When things go this wrong and you aren't even out of the yard yet, you should turn around and call it a day. I did the opposite and assumed that it could only get better!

We get to the one road crossing we have to do on all our runs. Nice quiet road never any vehicle traffic on it. Once we cross the road there is a large hill. Usually again, nothing on the hill. Today there is a skier and not a good skier. She's having trouble getting up the hill. I did see her in time to stop and give her a few minutes to get out of the way. But we aren't very far down the trail and the dogs are fired up. Fortunately she decided just to get off the trail and let us by.

It's a law that no one is ever around when I'm having one of those runs that makes me consider running the Quest some day. Nope, when everything goes perfectly the trails are deserted! People are only around when it's a complete and utter gong show!We get passed the skier and Raven decides this would be a good time to show Paxil who the alpha bitch is. Paxil of course disagrees with Raven's opinion and the two of them end up tangled and trash talking each other. Antare did something to his harness so he's been on three paws all the way down the hill. Did I mention there isn't enough snow to set a hook? So I have two fighting dogs and one limping dog and no way to hold the team in place. Oh, the joy! I did manage to eventually tie off to a little tree and get things straightened out. And we were off again... 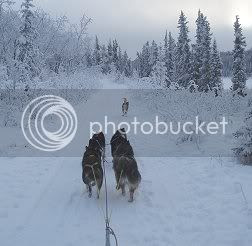 For awhile everything went right...don't they look like a nice little team? The scenery was lovely. Frost everywhere, clouds that look like they might have some snow in them. 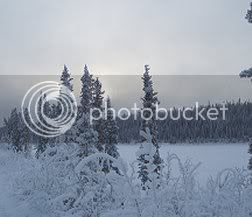 Then I made them turn onto the lake. Antare got his tug line caught on a tree stump--a tree I'm pretty sure I knocked down last winter because we kept hitting it(It was already dead!) It was not Antare's day! So I manage to get that straightened out without loosing the team and we head off across the lake. A crossing we have made hundreds of times over the last five years without incident.

Today Raven decided she wanted to play with Daisy who was running loose in front of the team. Every time Daisy turned, so did Raven, including trying to go up a very large hill off the lake that goes no where! Took four tries to talk them out of that. By the time I got everything and everyone facing in the right direction for the final time, Paxil had just given up hope of ever moving again and laid down! Which is about what I felt like doing.

The rest of the run went relatively smoothly. My throat hurts from ranting and raving like a lunatic! Antare is limping and I'm going to find the key for the stupid quad again!!
Posted by Wandering Spirit Kennels at 1:46 p.m.

I know what you mean about your throat hurting from ranting and raving. I have had days like that. Especially when you can NOT get a snowhook to hold. Hey, it's like that here, even though we have four feet of snow. Too soft to hold a hook for more than a few seconds.

I'm insanely jealous, Janet. I'd settle for six more inches of snow! I checked out your blog. Great pics!