Paxil and Earle are back!

Paxil and Earle both returned to harness work today! Paxil led a small team on a pretty short run. Just 7km, but I didn't want to go too far in case she wasn't up for it. She was fine. Earle was a slacker, but at least he felt like coming along. 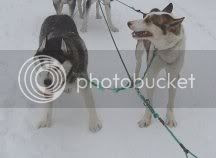 Earle ran in swing beside Ozzy. Ozzy was watching a squirrel and would not look at me when I wanted to take his pic! Little stinker! Earle did really well at the start, but his tug line was slack most of the way home. Considering that six weeks ago, I was pretty sure he was dying, I'll take a slack tug line! Besides I think he's only run about 20km so far this year. The vet wouldn't let me run him at all until he'd lost a few pounds. He needs to loose a few more before he can do any longer distances, but the thyroid meds seem to be working. Hopefully, it won't be too much longer before Earle is back in top form! 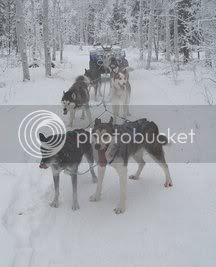 Paxil already is back in top form. Lead dogs don't come any more reliable than this little girl! The incisions from her tumor removal have all healed up. The puncture wound under her leg developed some totally bizarre symptoms. It wasn't quite an abcess, but the vet said some bacteria in the wound was making it's own oxygen and could have become an abcess. Paxil's leg and side squished like she had water under her skin. She's been on a couple antibiotics since Wednesday and is much improved. She doesn't sound like an alien anymore when I pet her! 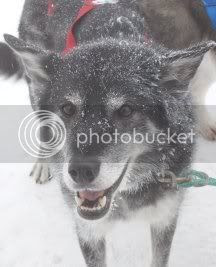 She was pretty pleased with herself and I think a little ticked that we didn't go farther. WOOO HOOO, I have two solid leaders again! 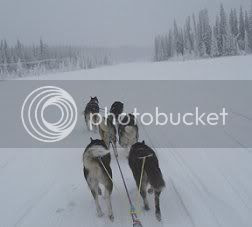 I never thought this would happen. Usually, when there's enough snow to run the sled, I have to keep the dogs off the lake as the ice isn't safe yet. Today I ran the team with the ATV across the lake. Never thought there would be safe ice and not enough snow for the sled. I'm getting a little bitter, but more of the white stuff fell today! And Stuart is working on my dog box right now so if there isn't enough snow here soon, I can drive to where there is!
Posted by Wandering Spirit Kennels at 5:41 p.m.

Head up to Fish Lake if you're wanting to get to snow. Not a ton on the lake (and a bit hard to control), but when we were up higher on New Years Eve, I stepped off the trail and sunk down to my knees (or deeper in some spots)!!! What a shocker!!!

But, the only drawback: there are a TON of teams up there right now...