I officially started my holidays today. I don't work Mondays normally. So now I don't have to go back to the office until March 1. However, if it keeps going like this I might have to go back early!

My day started at 8am....who the hell gets up at 8am on holidays!? Well, I most certainly do not. However, my neighbor's St. Bernard was in my yard. You can imagine the sheer volume of my dogs with this interloper in their space! There was no sleeping in! I walked Zorro home and gave the neighbor a little lecture. Then decided since I was up I might as well do something. Took baited water around to all the dogs. One scoop of kibble in a big pail of water. That's all I baited it with, but they drank like it was the greatest thing ever. Decided to feed myself, wait an hour or so and head out with a team. Hook up a six dog team. My only excuse for this is I was still half asleep--but I tied the quick release line to the wrong spot on the sled. Not only would it not release, but I broke the handlebar!

Attempted to run my little sprint sled. Complete and utter chaos. I remember now why I don't use that sled anymore. Gave up and busted all the dogs loose. Poor Deuce had been hooked up twice now and was going insane. At least I have completely gotten over the delusion that we could run four dog sprint races. So the morning was not a total waste! Better to figure this out in the yard than on a race trail!

Spent the majority of the afternoon at Steve Tufford's. Steve is a great sled maker and originally made my sled-not for me though, but if I can ever afford a brand new one, it will be one of his! Fortunately, he also does repairs and had the plastic I needed to build a new handlebar.

I did eventually get the sled repaired and with much nagging from Stuart took a six dog team out. I didn't want to go(seriously, days like this don't get better!), but he just kept bugging me and helped me hook up, mangled hand and all. 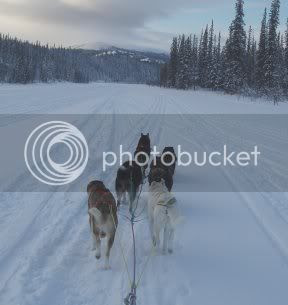 We didn't go far, just a 7km loop, but it wasn't a disaster. Everyone made it home uninjured and the sled in one piece.


And a Stuart update..fortunately his specialist appointment went well. The hand specialist expects he will make a full recovery. The pin has to stay in his ring finger for at least three more weeks. He can start doing some physiotherapy after it's out. He did do some nerve damage, but the permanent level isn't known yet. Nerves are slow to heal and it will be at least a year before they are as good as they will get. Right now he has massive pain in his ring finger and two of his other fingers are almost completely numb. We are both very relieved that he doesn't need any surgery! He's trying to find a way to go bison hunting still--not a good patient at all!
Posted by Wandering Spirit Kennels at 7:23 p.m.

My day was similar - I did a bunch of stuff in town in the morning, then headed home to get out a team. I was looking forward to it (beautiful day eh?), until I let the 8 dogs loose to get hooked up (they're USUALLY fine), but today, Jack and Ripper got into a big brawl! I'm in denial that they hate each other I guess.

Well, everyone else was so fired up (and psycho!), they tried to get in on it... it was a freaking disaster!!!! I pulled them all apart, went hoarse from screaming my head off. Luckily there was only one small bite wound and that was it. But I was soooooo PISSED off I threw them all back in the pen and went inside yelling "Screw you guys!!"

(my patience was very thin, as this comes 4 days after Kate just went in for surgery due to a "skirmish" in the yard - hm, maybe we should switch to chains f/t?!?!)

Ha! I feel much better now!! Tomorrow we shall try again...

Well, I'm kinda glad he made me go. At least I reminded myself that I can do this, most of the time!

I hate pack fights! Nothing worse than trying to break up two fighting dogs with 10 of their buddies trying to get in on the action too!

I threaten them with chains sometimes. I do actually use them occasionally--when they are in deep, deep trouble, about the time someone is at the vet clinic and I've lost my voice from yelling at them! The vet bills would probably be lower if they were chained, but I'm such a sucker, I just can't do it!

Oh, Kate's great! She was bouncing around the very next day, defying that age-thing once again! Now she's practically driving me nuts, 'cause I'm keeping her in like 24/7. I totally don't trust those guys loose with her. One wrong move and there goes the drain/stitches/etc. She's been super sweet though, and is definitely enjoying the one-on-one time with me (or is it the couch??!).