WOOHOOOO Back on the sled... 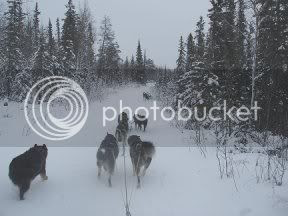 Taken yesterday near the little lake behind our house. I was a wimp and only took a five dog team. I should have taken six. I thought the skidooers would be as excited about the snow this week as the mushers. But there hadn't been many of them out and for about 10km of our 15km run, we had to break trail! It was slow going much of the time, but 5 dogs on the sled is better than 10 on the quad! 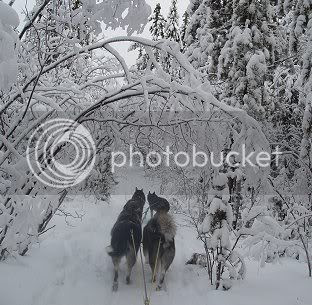 The sweeper trees are everywhere this year! Tons of frost and willows hanging about! 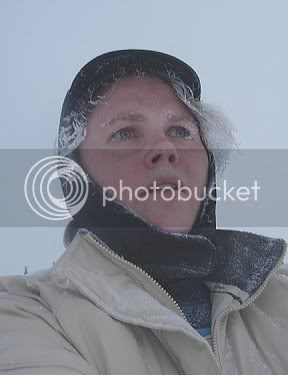 It was even cold enough to get a little frosty! Hobo was so tired afterwards that he fell asleep sitting up. A tired Hobo is a good, good dog! 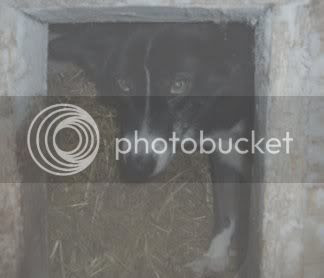 Pingo hide in her house for awhile after the run, until she was offered a spot on the couch! She's never turned down a chance to be a couch potato!

It was great to be back on the sled. I didn't even need handwarmers, which are a neccesity on the ATV!

On a non-dog related note, my hubby, Stuart, crushed his left hand earlier this week. It's not pretty. Tomorrow he goes to see the hand specialist, who just happens to be making a trip up here. There is a chance he may loose at least part of his ring finger. He's not a happy camper. Men are lousy patients in general and Stuart really doesn't sit still well. He probably wouldn't be hurt if he was capable of slowing down for a few minutes!
Posted by Wandering Spirit Kennels at 11:04 a.m.

Yippee! I finally got out on the sled out of my place too! Skijoring is possible too! Woohoo!! It's about time, it's almost freakin' FEBRUARY!!!!

The sweepers are killer around here too! I spent half the time crouched down almost sitting on the runners. Makes for great photos though! :-)

That's a cute pic of a tired Hobo.

Holy crap about Stuart! That's scary. Best wishes to him... and his finger.