Tonight marks two years since a wolf tried to make Hobo his dinner. Hobo survived by slipping his collar and running as fast as his little legs could go. Fortunately, Hobo is very fast and he has good sense. He found a kind neighbor who took him in and kept him safe until he figured out where Hobo belonged. That was kind of a complicated process as Hobo wasn't our dog at the time. He belonged to another musher who had broken his pelvis in a race that afternoon--Never look down to drop your drag mat while going around a corner; it leads to painful encounters with trees. Jim doesn't live here and didn't have anyone with him who could take care of his 14 dogs while he was hospitalized. So they came here. That night we had set everyone up on a tie-out and dished out straw, food and water. Then we went to the hospital to tell Jim his dogs were ok. Well, they were when we left. When we came home, one was bleeding profusely, two were hiding under the dog truck and one was missing(that was Hobo). Once we located him, it was off to the vet with both injured dogs.

Hobo's injures were massive. He was essentially split open from end to end. All the muscles around his tail were shredded. Our vet would not even discuss his odds of survival, but was very sure that if he survived, Hobo would never have bowel control. Part of his ear was gone, there were dozens of puncture wounds and spots were chunks of skin and fur had been ripped away. It was not a pretty sight.

Imagine how much fun it was to go tell Jim about his dogs! Fortunately, he was in rough shape himself. Large doses of morphine took the edge off the bad news!

Hobo needed intensive care and was not expected to ever run again. His owner is a competitive sprint musher. Hobo wouldn't have been able to race. So Jim offered Hobo to us. How could we refuse!?

It took months to get Hobo back on his feet. Just as he would gain some strength, something else would go wrong. A bone infection almost lead to the amputation of his front leg. The wounds on his back leg would not heal. There was no skin left to stitch them closed.

Through everything, Hobo was happy. He never snarled, never bared a tooth, never fussed about taking pills, having the drains flushed or the other dozen painful things I had to do to him every day. He tried to stand when he saw me. He licked my cheeks while I flushed drains and loved to sleep with his head in my hands.

Hobo is covered with physical scars. The fur on his belly never grew back. He gets frostbite if he's outside in the cold for too long. (not so much of a problem this winter!). He has a perfect semi-circle missing out of one ear. There are little lines and missing fur all over his body. He also has some psychological issues. Mostly that he will not sleep outside. He hates the dark now and only goes out for brief periods after sunset. He sleeps in a nest of blankets that he dragged into a closet! Hobo does have full control of all his bodily functions and he is still able to work as a sled dog. He hates being left behind and is very vocal about his displeasure! 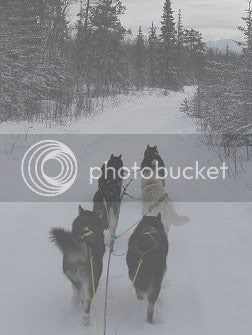 Hobo marked the anniversary of his near death by doing what he does best--running. He's in swing beside the solid white dog, Pacer. 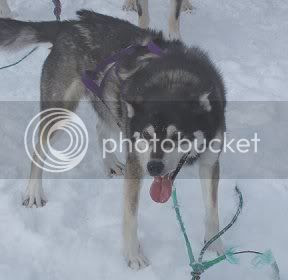 15km tired him out briefly. He's outside racing around the yard again right now! 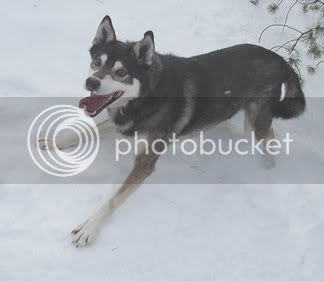 Can you see why we call him "psycho puppy"? He's nine years old now, surived a wolf attack and still dances around like a puppy!

Happy Anniversary doesn't seem appropriate! I am sorry your road here was so painful, little Hobo, but I am glad you found us. I do love you, my little nutball!


PS: Diesel, the other injured dog, made a full recovery as well. His gait has permanently changed, but he is back racing!
Posted by Wandering Spirit Kennels at 3:58 p.m.

Pretty amazing story. Especially his attitude during the whole thing. I bet that experience really bonded you two.

Very nice of you to take him in and bring him back to recovery.