Delta, our most timid dog, has vanished. No tracks, no barking, no calls. I have his picture everywhere, he's wearing tags and has a microchip. I drove 50km from home today--he's a husky, he could run that far with no problem. The problem is Delta is so timid that he won't let anyone else catch him. I've put on the posters to call with even a sighting. 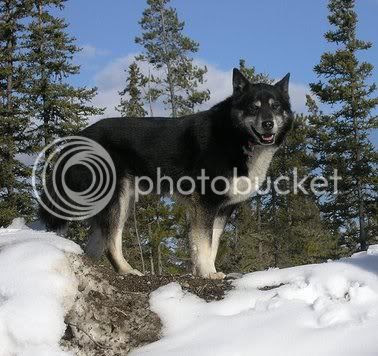 This is my beautiful boy. He's missing on the south end of Whitehorse, Yukon. He's four years old, neutered, brown eyed,wearing a bright pink nylon collar. He's afraid of his own shadow, but he loves other dogs. He may follow another dog home and he is used to dog teams so he may latch on to one of those too. I know it's a long shot, but if anyone reading this spots him, please email me or call the numbers on his tag.

I am worried sick for my little guy. Stuart's out on the skidoo looking for him right now. I'm heading out with his brother, Antare, to search some more too.

Oh crap! I'll keep an eye out wherever I go, and spread the word. Poor Delta. Weird that you didn't hear anything or figure out how he got out?

Awww, hope you find him again!

Thanks, Stacie. He is most likely to end up where there are other dogs. Not big on people, adores other dogs.

Poor guy. I hope you find him soon.