Over three years I've waited for this picture:

Over three years I've waited for this picture: 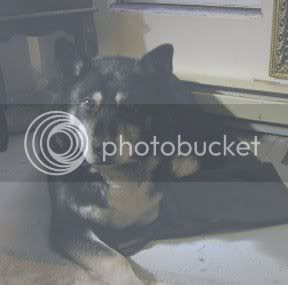 Delta is in the house. Delta takes timid to a whole new level. He is pathologically afraid of people. Loves dogs, people are scary. It took almost two years before I could touch him on a regular basis. He still acts like I might kill him at any second when I'm petting him. Lately though he's been lurking around closer and closer to me and to the house. Tonight he was covered in frost and holding up one paw--ice balls in his pads. I asked him if he wanted to come inside and he laid down not far from the door--Don't ever think that dogs don't understand what you are talking about. He wouldn't come in on his own. He never has. I picked him up and carried him. I carry Delta around quite a bit. He won't walk on a leash. He just goes stiff and tries to become one with the ground at the sight of a leash. Usually when he comes inside he lays right where I set him down and never moves. Tonight, he actually wandered the house, even ate some cat food and then settled in on Sleet's bed. Four hours later, he's still there. He seems quite comfy! :)

One of my goals for this winter has been to get Delta into a harness, but using the ATV with him is out of the question. The noise would scare him silly. It's snowed a bit in the last couple days and he seems to have unpacked some more baggage now. I think if I hooked him up beside his brother, Antare, Delta just might connect with his inner sled dog! Antare's confidence took a huge leap once he started to work in harness. I hope the same thing happens for Delta.
Posted by Wandering Spirit Kennels at 9:04 p.m.

Congratulations. I hope that was the first of many more bold steps by Delta.