After the disasterous run on Saturday afternoon, I got the quad back out. Actually, my neighbor's quad. He broke his heel and can't do much of anything for several months. His quad is much more reliable than mine! I am loving that automatic tranmission and the parking gear! Really the parking gear is the only good thing about training on the quad! 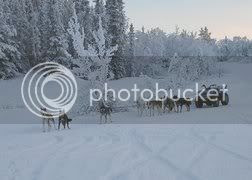 With the quad, I can get off and take pictures like this and not have to worry about walking home! Actually, in this case, I'd gotten off to see if we could cross a ravine and Wolf Creek safely. We could have, but we didn't today. The dogs were well into their run and already a little tired so we headed for more familiar territory instead.

After their performance on Saturday, Paxil and Raven got their act together. They had a lovely run yesterday. 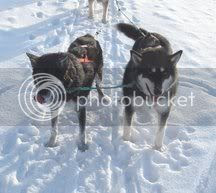 One encounter with a small loose dog. I've never understood what possesses a 20 pound mutt to jump into the middle of what must appear to be a wolf pack! You'd think any dog with functional brain cells would get as far away as possible, but they do it all the time. Fortunately, this one only got some salvia in it's fur and no other injuries. I had a tangled up team, but no injuries either. 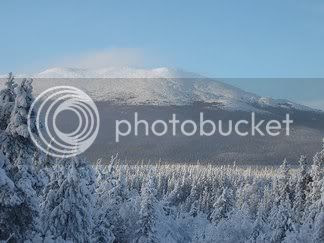 It was pretty out today. Despite not being on a sled, it was still better than being at work! 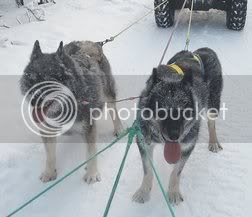 Deuce has worked his furry butt off all weekend. He's been a pulling machine. He just can't stand to be left behind. So he's run 3 days in a row. He was a little tired today and even let his tug line go slack near the very end, but overall I'm impressed with this pound mutt! He's a dang nice dog! 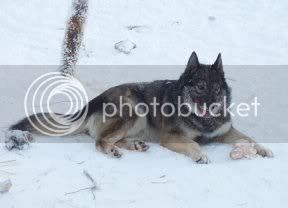 A dog that works that hard deserves a little treat post run--moose bones are always a good choice!
Posted by Wandering Spirit Kennels at 2:36 p.m.

Oh hell, that Deuce is such a totally georgous dog. I want him!
I hate you.
:)

And of course I can't spell gorgeous correctly. That probably just means I'm not gay.
Not that there's anything wrong with that...
What a pretty pretty boy.

Hey Sean
There was a time when I called Deuce a foster and I might have let him go, but not any more. He's turned into a dang fine sled dog! He is pretty though, isn't he? He has the most amazing winter coat--thick and silky.

Are you the same sean who posts on sibernet-l?