Mac can run in lead!

With Paxil sick, I was short a lead dog today. Although when she saw the harness, Paxil got up and starting wooing. Now she's ignoring me for leaving her behind. Howdo I explain "for your own good to her"!!???

I have two command leaders, Pingo and Paxil. Pingo had no choice but to come along today. The dog she often runs beside (founder) has a paw injury and he can't run for a week or so yet. Franklin will run up front, but Sunday afternoons tend to be busy and we run into lots of loose dogs. Franklin has been jumped by a loose dog once too often and now he attacks first. Not a great option for leading on a busy day! Muskwa won't run for me. It's just aggravating for both of us. He only runs for my husband. Sleet's too old and stiff although she'd try if I asked her too. Leading is too much pressure for Antare, Earle, Chase or Pacer. Hobo's too crazy and tend to try and lead us off on trails only he can see! Hmmm, running out of dogs here!

So I put Mac beside Pingo. He's got great drive and never lets up. He's timid normally, but I have seen no fear behavior from him in harness. He knows the trail I planned to run today so as long Pingo followed the commands we should be ok.

He ROCKED!! He never let his line go slack. He made all the turns. Did whatever Pingo told him to do. Never hesitated. Passed a car on the way home and a bunch of skidoos at one spot in the trail. Mac's pretty bright and picks things up quickly. I think he'll learn the commands in no time. He got a big chunk of arctic char when we got home for all his hard work. 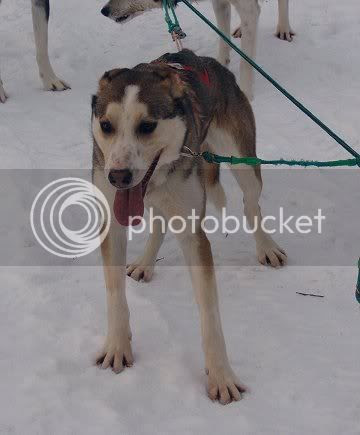 The picture is from earlier this year, one of Mac's first runs ever! He's only 18 months old. He's got a long career ahead of him!

Ozzy, Mac's brother, also came along today. Ozzy likes to pull, but please don't make him do anything else. He's become a bit of a clown and all he cares about is having some fun! No decision making or control please. He's just looking for a good time. He's the same way in or out of harness. It's nice to see how far he's come from the terrified puppy who shook in the corner of his kennel all day! 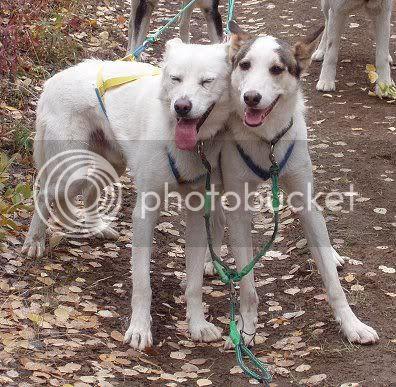 Ozzy is on the right in this one. Pacer is beside him. The pic is from this fall when we were still training on the ATV. It's one of my favorite pics and show's Ozzy's goofy side perfectly!